Secrets in a Dead Fish 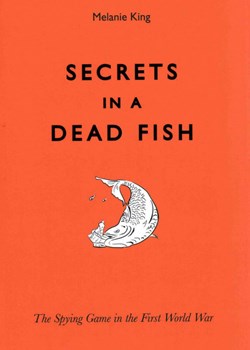 This small volume is sub-titled The Spying Game in the First World War. ‘Game’ might be a word that springs to mind when reading this book. To modern eyes, with Facebook, GPS devices and sophisticated digital means of tracking and listening; some of these methods of espionage seem positively ‘Heath Robinson’! Yet  some of the techniques employed were quite clever and, given the resources and tools available at the time, probably rather innovative.

Whilst the book’s brevity implies that espionage and spying was all done on a very small scale in those days, the Great War was the first ‘modern’ war, although apparently conducted in a rather gentlemanly way at the outset at least, but by the end pretty ruthless with the executions of the likes of Edith Cavell.

While some of the incidents described appear ludicrous – indeed  the title of the book is derived from one of the stories quoted - where the River Scarpe flows eastwards, agents were cutting open dead fish and putting messages inside them; closing them up and throwing them back in! The narrative does not tell us if any enemy messages were discovered.

The book is illustrated with drawings and arranged thematically, rather than chronologically. It calls on the reminiscences of eight different agents. Each of the stories is referenced and the author offers a short list of further reading (to which I would add the Memoirs of a British Agent by Robert Bruce-Lockhart). One of the stories quoted appears in stages, in three different sections, and appears disjointed. Nevertheless, as the focus of the Great War often seems to turn on  ‘derring-do’ in the trenches and the Royal Flying Corps, Secrets in a Dead Fish is a book that makes you think about the other methods of fighting and winning a war in the early 20th Century.

For any reader who is familiar with the activities of Sidney Reilly, some of the methods used may seem very ‘tame’ but  then, Reilly and ‘C’ are said to be the original inspiration for Bond and ‘M’!