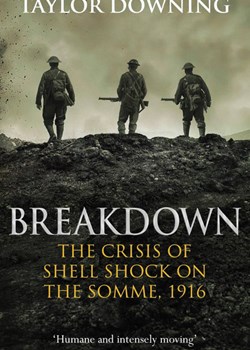 Once, when asked what really interests the House of Commons, a MP is reputed to have said, ‘Buggery and badgers’. A wild simplification, yet, if one was to ask a similar question of a member of the general public about the Great War, they might, possibly, scratch their head and say ‘The Somme’, possibly ‘The waste of lives’ and ‘Shot at Dawn’.

Despite increased awareness of Post Traumatic Shock Syndrome and its crippling effects, the scale of ‘Shell Shock’ in the Great War is relatively unknown.

Taylor Downing links the Somme with shell shock, analyses the massive increase in cases during the battle and provides an overview of its treatment – the good, the effective, and the appalling. He also highlights the massive concerns felt by the army about the huge numbers affected and its fear that such breakdowns could create – and in some cases appeared to have created – an epidemic.

Although a very large number of books on the topic, its symptoms, causes, diagnosies and treatment, were written during and after the war, the majority have been directed at a specialist audience and rarely employed in research by military authors either popular or academic.

Downing offers a link between popular and serious history. Early chapters – titled The Pals Battalions, Training a Citizen Army and The Big Push – will be very familiar to those with a serious interest in the Great War. Whilst sharp, insightful, and in apparent alignment with the latest educated thinking on the British Army and its development, his views will I suspect be skipped or skimmed by more knowledgeable readers. Equally there are a number of ‘facts’ presented in these sections of the text, not least the unwarranted award of the MC to the un– medalled – apart from ‘Mutt and Jeff’ that is – R C Sherriff. A warning to all here – including top authors, historians and TV producers – cross check your facts and do not trust everything you read on Wiki!

Much of the author’s research appears to have been drawn from secondary sources – I am sure, for instance, that many readers will, like me, argue that Official Histories (OH) do not entirely deserve to be judged as primary sources, even if they are ‘official’. Nevertheless, Taylor Downing has been assiduous in his analysis and the length, breadth and depth of his research and much in this fascinating book was entirely new to this reviewer. Not least the analyses of the magnitude of problems during the Somme battles, their consequences and the overall reaction of commanders. Nevertheless things improved, doctors while often disagreeing about modes of treatment, learned. Treatment near the front line – which became standard practice so quickly that the US Army employed it from the start of its time in France and became standard operating practice in war – returned the less seriously affected to duty surprisingly effectively. Not least, Downing indicates that definitions of ‘shell shock’ were fixed’ by the nomenclature in use at the time – ie Neurasthenic, NSW (Shell Shock Wounded), SSW (Shell Shock Sick) – with the hint of malingering. Equally, many cases went unrecognised – or unaccepted.

The British Army, concerned by the ‘wastage’ of troops, took a tougher line with sufferers after the Somme and not least there was a strong – and perhaps questionable – whiff of social and class judgement in the author’s statement that the ‘kinder’ diagnosis, neurasthenia, was largely reserved for officers. More important is the fact the use of the term NYDN (Not Yet Diagnosed Nervous) was deployed in line with wishes from above. It certainly muddied the waters and there is evidence to suggest that obfuscation by the army also allowed many of the afflicted to be inadequately or inaccurately diagnosed.

Certainly the War Office Committee of Enquiry into ‘Shell Shock’ in 1922 expressed its regrets about unsatisfactory statistics in its deliberations, noting them as a ‘…cause of concern’. While the OH accepts a figure of 16,138 cases of shell shock between July and December 1916, the figure, the author notes, excludes, ‘Shell shock ‘S’, and does not include all diagnosed with Neurasthenia’. The author judges the more likely figure to be between 53–63,000 cases during the War.

Whilst academic books on the topic have been written, this is a valuable and highly readable work for any collection of books about the less well travelled roads of Great War history. Strongly recommended.