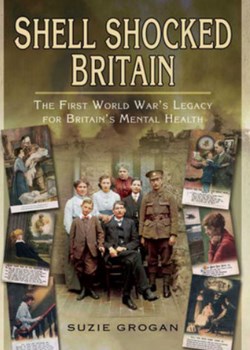 Suzie Grogan’s interest in ‘shell shock’ was inspired by a tragic incident in 1922 involving one of her ancestors, Alfred Hardiman. The event was hushed up by the family, and only re-awakened when Suzie discovered the story in The Times archive in 2005. Although Grogan does not directly attribute the tragedy to Hardiman’s experience in the First War, she describes how it stimulated her interest in the long term effects of combat and goes on to explore in great depth the effects on both military and civilian populations of their experiences in the War.

The book explores the mis-use, both historically and currently, of the term, ‘shell shock’ and Grogan sets her story securely in a historical period where attitudes and expectations were rigidly defined. She challenges several commonly held assertions about the war and reveals the attitudes of the military and medical establishment which showed a class conscious and highly unsympathetic view towards ordinary men and women. She argues that ‘there is (not) a clear boundary between the Front Line and Home Front experience. Troops were faced with situations of indescribable horror, and were subject to long periods of intense anxiety and hours of ear-splitting bombardment by enemy shells, yet the loneliness, the ‘not knowing’, the guilt of the survivor, all had a psychological impact, too.’

Grogan quotes Professor Jay Winter that ‘shell-shock’ could be a particularly British construct used to describe medically a form of nervous collapse, more readily attributed before the war to women, with no direct translation in other languages. She suggests that shell-shock has always been a cultural rather than medical construct, used, from its inception in 1915, to describe thousands of otherwise healthy men. Initially there was a supposition that to be ‘shell-shocked’ must have involved a physical wound caused due to the proximity of an exploding shell. It took some while for medical officers to link the term to the psychological effects of being exposed to the noise and fear of the war. Even so, she argues that the medical establishment was reluctant to acknowledge any psychological aspect for fear of damaging morale and encouraging other sufferers to come forward.

Suzie Grogan's central argument is that for the men who came home, many found themselves unable to sustain or make relationships, keep their jobs, assuming they had one, homeless, operating on the fringes of society. Society, expected the men to resume the life they left behind before they joined up and had no solutions to deal with them. Grogan compares it with the present day situation where, although there may be an awareness and sympathy towards those who have experienced war zones, we are no nearer solving the problem of the many military personnel who are unable to cope with civilian life.

Grogan makes clear there was a class divide, with the writings and art of officers describing emotions and experiences, but only in recent years has the experiences of the working class narrative been recognised. Even so, there was still a taboo about mental illness despite 80,000 men being diagnosed with shell-shock by the end of the war. In 1920 a Parliamentary ‘root and branch’ investigation of the causes and treatment of ‘shell-shock was set up and reported in June 1922. The all male, conservative, middle and upper class, committee interviewed only six servicemen, although over 60,000 were drawing disability pensions for mental ill-health and 9,000 were still under treatment. It concluded that the term ‘shell-shock’ should no longer be applied as a diagnosis and soldiers suffering with concussion should be defined as battle casualties whilst those with neuroses should not. The report quoted an unattributed ‘well known’ doctor as saying that many recruits were already neurotics and did not want to serve, effectively branding them cowards. The blame for breaking down was poured entirely on the rank and file soldiers and that, whilst ‘shell-shock’ could affect anyone, only the ‘inferior’ broke down. Even as the report was being written, more and more ex-soldiers were being incarcerated as ‘insane’.

Grogan questions just how far we have come in recognising and addressing the issue of shell-shock and notes the issues facing ex-service personnel today. She also highlights the casual way the term has been appropriated to cover ‘the least desperate emotions’ such as a surprise sports victory. What is clear is that many of those affected were nowhere near a shell, despite being described as ‘shell-shocked’. The effects on civilians at home, especially those affected by aid raids, who were experiencing the noise and damage of the zeppelins and aeroplanes, often coupled with the anxiety of loved ones engaged in fighting, should not be underestimated.

Grogan has thoroughly researched her book. She covers a period still embedded in repressive nineteenth century constructs and values, confronting the first real citizens’ war and not being able to acknowledge or understand it or treat it with compassion. She reminds us of the class conscious attitudes of the time and of the sexist approach that saw pre-war mental health issues as hysteria for women and weakness for men then being attributed to ‘shell-shock’. She writes knowledgably about the perceived gender imbalance, proving that the war had accentuated it, rather than causing it, explores the frightening and evil role of the eugenicists and the link to mental health.

Suzie Grogan’s book is not just a well researched analysis of an issue often not given sufficient knowledge or understanding by historians of the period, it is as relevant today in a world still beset by conflict. She quotes that over the six years to 2014, referrals to the charity Combat Stress have increased by 66%. They are, on average, men in their forties who have served for about ten years. Of those, 82% were soldiers. She ends her book reflecting on modern combat stress, linking it to previous conflicts. We cannot expect people who have gone through the horrors many at the Front and at home experienced not to be permanently altered.

Her final quotation from a Combat Stress leaflet aptly sums this up. ‘The man who lost his life in Iraq now lives in Birmingham.’