Steady the Buffs! A Regiment, a Region & the Great War by Mark Connelly 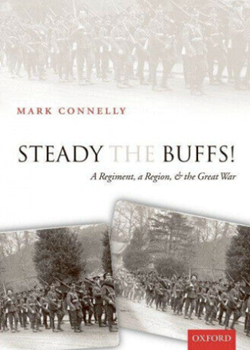 The author is the Head of History at the University of Kent and has examined the Buffs (the East Kent Regiment) to tell how the “learning curve” took several battalions from the Somme to the final stages of the war, by which time the British Army was an unbeatable fighting force. We are shown how their combat performance developed with attention being paid to officer/man relations, the understanding of new weapons, working closely with artillery and the response to the soldiers and their local communities of which they were considered as such a vital part. 1st, 6th, 7th and 8th Buffs are considered, a regular battalion and three Kitchener battalions all serving with different divisions, but the TF is excluded as none of them fought on the Western Front. This is an important work which helps us to understand the quality of the army and its relationship to the local people who supported them and from whom they were drawn. Bob Wyatt