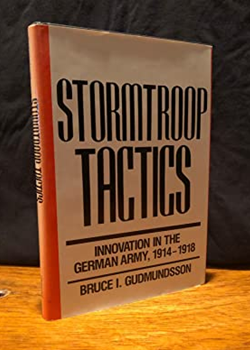 It is perhaps rare to find Great War tactics being held up as a model for today's soldiers—but this is the approach taken by Bruce Gudmundsson in his fascinating interpretation of Ludendorff's Germans for the benefit of Schwarzkopf's Americans.

Taking his cue from Timothy Lupfer's The Dynamics of Doctrine (Fort Leavenworth, 1981), Gudmundsson dissects the way the Germans analysed the problems of the offensive in trench warfare, and built up the 'stormtroop' method that would be so impressively demonstrated at Caporetto, Riga, Cambrai and in the 1918 spring offensives.

The author usefully shatters a number of popular myths, notably reducing the personal contributions attributed to the French Second Lieutenant Laffargue and to the German General Hutier. In their place he elevates such figures as Lt Col Bauer of Falkenhayn's staff, and especially the infantry Captain Rohr—who took over the first Sturmabteilung in the summer of 1915 and developed it as a complete all-arms battalion that could add high-firepower stiffening to line units when they had to perform special assault tasks. The Sturmabteilung originated in the role of the Pioneers as breaching experts in fortress warfare— a role that naturally gave them plentiful experience in trench raiding, as well as priority for new assault weapons such as mortars, infantry cannons and flamethrowers. The initial detachment was therefore soon joined by a number of other similar units until by the start of 1918 the high command was hoping to convert every infantryman into a storm trooper—although in the event only a quarter of them would be so converted. All this makes a very convincing, well researched and revealing story, correcting and complementing the earlier work of Lupfer and G. C. Wynne at a number of important points.

Unfortunately, however, it suffers from the grave defect that Gudmundsson seems to be mortally prejudiced against anything British. Throughout the book the studiously ignores the very many tactical innovations that the British were producing in 1915 and 1916, and systematically attributes them to someone else—usually the Germans—at some later date. Thus he sees no glory reflected on British tactical concepts by the fact that the Germans liked to use captured British Lewis guns for over a year before they could field a light machine gun of their own (p. 98); and he claims it was the 'Canadians' who invented machine gun barrage fire towards the end of 1917 (p. 148)— not G. M. Lindsay or the Camiers school as early as 1915. British officers are dismissed as 'incompetent schoolboys' (p. 175), whereas the Germans are especially praised for their excellent tactics in trench raiding (p. 178)—as if no one else was involved in that particular game, or on an even greater scale.  Ultimately, therefore, Gudmundsson has failed to locate the German experience in a balanced overview of Great War tactical development. He has seen what was creative about that experience, and how it evolved, but without seriously analysing either the slowness and limitations of its evolution, or the rapidity and breadth of the parallel British developments.

[This review first appeared in Stand To! No. 33 Winter 1991. Members receive a copy of our journal three times a year].