The Bloody Hand by Blaise Cendrars 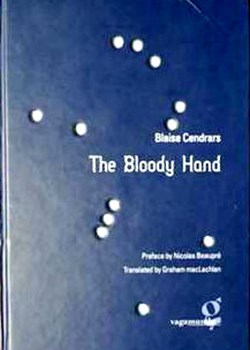 The Bloody Hand is the work of one of France’s literary greats.  This is a new edition from Nicholas Baupré

This limited edition hardback has been produced with crafts skills. Considerable thought has been given to the design, the layout of text on the page and the wonderful selection of art, drawings and coloured pictures from the trenches.

Cendrars was born in Switzerland. He was French-speaking. As a young man, he ent to Moscow where he fell in love. He then moved to Paris. For those who had the means, movement around Europe had few barriers.

With the outbreak of war, for his love of France, Cendrars joined the French Foreign Legion. In an open letter, co-written by fellow authors like himself, other were encouraged to do the same thing.

As you read you may be reminded of Erich Henri Remarque's 'All Quiet on the Western Front', 'Goodbye to All That' by Robert Graves or even Norman Mailer's first book based on his memoir as a soldier 'The Naked and the Dead'. Each is an extraordinary evocation of the period, its people and funny, fearful and sad human moments.

The Bloody Hand has class

The Bloody Hand is a terrific piece of literature. It is such a brilliant translation that I am encouraged to give the original French edition a go.

The Bloody Hand doesn’t have the narrative arc of 'All Quiet on the Western Front', or the chronology of 'Goodbye to all of that' rather it is a series of well-told stories of an odd bunch of characters skilfully portrayed who placed themselves in the extraordinary circumstances o war. As volunteers and French Legionnaires they behave as if the condition of war is the usual one, carrying on as if bullets are just like flying rain and bombs blow in like the wind to irritate their daily activities. They purloin food, find drink and woman, or simply steal from the German trenches as if it were a typical nightly activity to stave off the boredom of being placed in a 'quiet' section of the line towards the far southern end of the Western Front.

You will laugh out loud

In these stories, there is a spontaneity and stream of consciousness that reads like Henry Miller (without the smut). It is an indulgence mixed in with insightful reflections and great lines you want to learn and quote.

The characters are memorable, their behaviour often leaves a smile on the face: you will laugh out loud.

This is war. And many of them die. And the author has his right arm so damaged that it is amputated.

For these men 'war' was a job, and like a bunch of scallywags, they are forever finding ways to improve their circumstances. Through a series of events that see them steal a punt and cross into German lines through a labyrinth of broken waterways, stealing, inadvertently, German plans for an attack that brings the author unwanted attention from his senior officers. Being who he is, Cendrars turns down promotion and any honours. He likes living 'below the radar' as it were.

The translation from French into English is seamless

You are left with the impression that 'The Bloody Hand' was for Graham macLachlan, its new translator from the French into English, a labour of love. It uses the skills of someone who knows the French language intimately, and their role as a translator to transform a piece of fine French Literature into an equally memorable piece of English literature.

The Bloody Hand is a memoir, written three decades after the events they describe.

Every chapter, a character or a tail, told as if from a bar stool or around a cafe dinner table long after the meal is over, creates a memory. Many are laugh out loud funny, others are curious, and yet others make you stop, think and takes notes.

As the author himself states, 'The Bloody Hand' is not a history and yet like the very best of authors it gives you a sense of the place and circumstances of a group of men who joined the French Foreign Legion.

There are wonderful lines such as these:

‘The red lice are nasty little buggers and there and there were a lot of them on our side. Similar to a fly that brushes its belly and then strokes its wing-cases with its legs, a louse will sometimes stroke its bald head'.

Which are used to help describe the character Ross:

'Ross did exactly this when he was writing to his wife rummaging through his long beard and scratching the top of his head which he kept naked liked a kneecap.’ (on page 11).

We learn about characters such as Bikoffa, who makes for himself a camouflaged tree that he uses for sniping at the German lines until the side of his head is blown off - he loses one eye, then is blinded in the other and later marries a Russian Girl and become a piano tuner.

Something as simple as breaking into a collapsed property and disturbing a hen that had been trapped there creates a memory where “that disturbed and cackling ball of feathers …” “I would never have believed a farm hen could be as dangerous as a bird of prey.” (page 110).

You laugh out loud at the antics of 'Plein-de-Soupe' - easily imagined as an Oliver Hardy like character.

“Its innumerable tracks - our hedgehog was always on the move - gave the impression I had found proof of a Martian invasion comprising millions of little homunculus which were invisible but on the war-path in the confusion of the Dompieurse Sector, riddled as it was with mines and countermines and creates worthy of a dead planet.” (on page 207)

There are numerous moments of magic, a story well told, a phrase, thought or image insightfully and skilfully constructed.

The Bloody Hand is an insight into one corner of French Regiment on the Western Front.

There is harshness too; such as when describing a friend who died head down in crap …

“One more death among the many thousands and tens of thousands! And all of them more or less preposterous. It beggars belief! I have already said it. God is absent from the battlefield. He keeps out of harm’s way. It is a disgrace.” (on page 204)

Or when describing that dreadful phenomenon of the men left out in no man's land who called for their mothers as they died.

“And we listen out for the little instinctive cry that comes from so very deep within his anguished flesh, hoping to hear no more such horror. We fire in the direction of his voice to shut him up forever … out of pity … anger … despair … helplessness … disgust … and of love, Oh Mummy!” (on page 276)

So Cendrars ponders in his final words in this extraordinary, worthwhile new translation of a beautiful book that requires you to own it to appreciate it.