The Blue Beast: Power and Passion in the Great War by Jonathan Walker 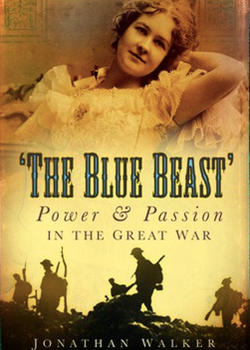 Most present the reviewer with few problems in expressing an opinion. However, every now and then a volume like Jonathan Walker’s splendid The Blue Beast: Power and Passion in the Great War turns up and defies simple categorisation. This is a book about somewhat strange aspects of the Great War; those who wielded power, contrived deceit and chose to ride the beast of passion while the Great War raged. It is a tale, by turns outrageous, fascinating and humorous in recounting the ‘careers’ of three remarkable, liberal, and liberated women.

Each came quite happily, and enjoyably, to terms with the impact of the collision between late Victorian, Edwardian mores and of increasing female education, emancipation and willingness to seek and enjoy sexual freedom. This is certainly not a story in which the poor get all the blame, but one in which it is ‘the rich what gets the pleasure’.

The first, Winifred Bennett, who had ‘the air of an exotic English beauty’, was wooed and won, by amongst others, Sir John French, and provided much comfort to him after he lost command of the BEF. Emilie Grigsby called herself the ‘mascot of Britain’s High Command’, and did much to deserve the title. She was American by birth, the daughter of a female bordello owner, and extremely wealthy through her long relationship with a roguish American multi‒millionaire before she came to Britain. She was mistress to, amongst others, General Sir John Cowans and Lieutenant Colonel Charles Repington. The third is the Hon. Sylvia Henry, née Stanley. Prime Minister H. H. Asquith’s long and highly emotionally charged wartime correspondence with Venetia Stanley has been known for some years. However his equally foolish, and foolishly expressed, devotion to Sylvia Henry ‒ Venetia Stanley’s sister ‒ was unknown to me. Whilst Asquith’s intentions do not seem to have passed beyond what both Sylvia and Venetia described as ‘fumblings’, they would be sufficient today to disqualify him from high office.

The fact was that like many in the higher echelons the three enjoyed the levels of sexual freedom denied those of the middle and working classes. The three stories are set in wonderful, overlapping context in which liberated women fenced with noted ‘swordsmen’ in the term of the day, and did so with little regard for their reputations. All is told of their amours ‒ and the objects of their passion ‒ with wit and elegance and feeling for the period. En passant, and without once mentioning the great Goat himself, Walker sketches the peccadilloes of many others in the higher echelons of British society to present a fascinating sidelight on the ‘governing classes and its easy morality. Without doubt Bennett, Grigsby and Henry were women of the type my grandmother, once in service, would have known as, ‘No better than they ought to be’.