The Boys of Blackhorse Road by Malcolm Doolin 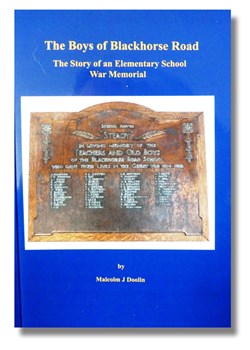 More than simply a collection of personal, short life and service histories of the boys who as men served and died during the First World War, The Boys of Blackhorse Road is a social history of the era, which ably straddles this extraordinarily transitional era, say 1880s to 1920s.

The story of the school is assiduously told; throughout it remains the principal 'character' from whom and to whom everything else refers. It is this that also successfully weds the current structure to the events of 100 years ago.

We forget or may not be aware how limiting the life opportunities were for many people just 100 years ago, our grandparents and great grandparents received enough schooling to suit them to 'clerking, shop work or apprentices'. It is refreshing to engage with a study that produced 'the rankers' - that is neither a grammar or public school: these stories are more grounded, there are no poets amongst their names.

The Boys of Blackhorse Road quickly fixes us to the memorial plate and the 55 names on it. Living in the Britain few of us will not have seen such memorial plaques somewhere and wondered at their provenance and the stories behind them: in stations, post offices, school lobbies and halls and in parks as well as in churches. They were men, for the most part, often young, some 'underage' but looking the part or able to get in with the collisions of the recruiting sergeant: they were boys and men who had, like us and our children, attended the local school for a number of years, roots in the community that were dug up and too often buried in makeshift graves on the battlefields of the Western Front, Gallipoli, Middle East and Africa. 0f the 55 people on the BBR memorial, 20 have no known grave and 4 died in hospital on their return to Britain.

'The Boys of Blackhorse Road' is a story for Walthamstow and London, and a story of the First World War.

'The Boys of Blackhorse Road' is also a succinct, balanced, clear introduction to the First World War: the geopolitics, machinations of mid 1914, and society as it was a 100 years ago - not so different today, whether the layout of streets, the fabric of the buildings and its football teams.

Reviewed for the Western Front Association by Jonathan Vernon