The British War of War by Andrew Lambert 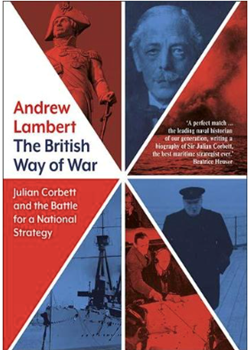 This is a weighty book in every sense.

It is lengthy, not surprisingly, as it deals with a complex and important matter, but more significantly it deals with serious concepts which are all too rarely discussed.

Professor Andrew Lambert has, in many ways, been leading up to this volume over the past years. He spent two years teaching at each of Greenwich and Sandhurst, moved to the Department of War Studies at King’s College, London, in 1996, becoming professor of naval history in 1999 and finally, in 2001, the post he holds today: Laughton Professor of Naval History and Director of the Laughton Unit. His many volumes all have the same qualities: superbly written with total mastery of the source material and a vision that is rarely bettered.

Many readers of Stand To! will know of Edmond’s Official History, Military Operations, France and Belgium, in its 14 volumes. They have probably heard of the five parallel volumes by Corbett and Newbolt of Naval Operations, and some may even know of Raleigh and Jones’ six volume The War in the Air. However, there is no equivalent to the seven Second World War volumes, Grand Strategy. That is because Corbett, in charge of writing the Official Histories while working within the Committee of Imperial Defence, saw the ‘strategy’ element as being intrinsic to the naval volumes. For years he had been trying to educate naval officers and politicians in strategic essentials, culminating in probably his two most famous volumes: The Seven Years War (2 volumes, 1907) and Some Principles of Maritime Strategy (1911). Note the latter’s title: Some... not The..., an important difference.

‘Corbett’s central contribution, Naval Operations, the Official History of British grand strategy and the naval war, would be dominated by the need to understand and promulgate national strategic doctrine. It would be the culmination of a career stretching back to the 1890s, analysing the evolution of English/British strategy, and recovering the guiding principles for naval officers, statesmen and even soldiers. The text would be the basis of post–war service education and updated doctrine, agendas that obliged him to reconcile the ghastly reality of total war on the European continent with pre–war expectations of limited maritime conflict, consistent with previous British experience’ (page 360).

Corbett was less interested in the tactical and operational level of command, leaving those to be completed by the Naval Staff in the series of Staff Histories, which formed the basis of Arthur Marder’s work. Corbett himself never claimed to have the expertise for such work, which was to be properly conducted by naval officers. Instead, his work was to be a teaching text that explained British strategy to post–war audiences. It would demonstrate how the traditional time–honoured methods of limited maritime strategy, with the two services acting in concert, under intelligent political direction, to secure control of sea communications and break the enemy’s economy, had been distorted and disarticulated by politics, alliances and alien strategic concepts.

This is quite simply a wonderful book, rich in understanding and knowledge. It is, in many ways, the culmination of Lambert’s work on the development of British naval and strategic thinking through the 19th century. It is warmly recommended.