The Coolie’s Great War. Indian Labour in a Global Conflict 1914–1921 by Radhika Singha 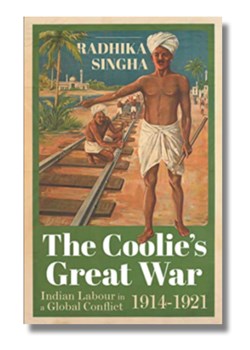 Military labour is a forgotten theme of First World War history. And yet the importance of labour behind the frontlines should not be underestimated. The Labour Corps was vital in securing Allied victory, yet John Starling and Ivor Lee’s 2009 No Labour, No Battle remains the only overview of labour units employed by the British armies of the First World War. In the years since, only one group, the Chinese Labour Corps, has been the subject of publications, exhibitions and documentaries. It has taken as a century for the first monograph dedicated to the more than 400,000 Indian labourers in the Great War to be published.

In The Coolie’s Great War, Delhi–based historian Radhika Singha provides an excellent and highly detailed study of Indian military labour. She provides details of the distribution of Indian non–combatant military personnel across the different theatres of war: nearly 337,000 to Mesopotamia, over 48,000 in France and Belgium, some 25,000 in both Egypt and the Persian Gulf. To these she adds some 13,000 in East Africa and several thousand more in Gallipoli, Salonika and Aden.

After explaining the imperial context of the non–combatant Indian engagement, which included a legal framework and a colour bar, the author explains social and military hierarchies within the ‘follower’ ranks of the Indian Army, their recruitment, disciplinary regime and rewards. That her authorship requires some 50 pages to describe these issues is testimony to the sheer variety of groups. These include ‘higher followers’ (including mule–drivers and stretcher–bearers) and ‘attached followers’ (cooks and sweepers) and their links to social constructs such as caste or martial race. The composition of Indian labour units cut across both the generational and gender divisions we usually associate with war service; they included both young boys, old men and even women.

Two particular units and their theatres of operations are highlighted: the Indian Labour and Porter Corps in Iraq from 1916 to 1921 and the Indian Labour Corps (ILC), which served in France during 1917 and 1918. The former, which included jail–recruited labour, was an ‘interesting experiment’. They were a highly diverse group of men from upper India comprising ‘tribal’ recruits from remote places considered ‘primitive’ and ‘backward’ such as Manipur and Nagaland who could earn rehabilitation by serving in the Indian Army.

Remarkable was the important role played by Christian organisations including The Salvation Army and the YMCA in matters of recruitment and welfare. This accounted not only for a relatively high number of Christians among the ILC recruits but also numerous missionaries who were commissioned and continued their evangelical work by accompanying their flock to the Western front. The author does not depict those who served as passive followers and executers of military orders but rather shows that Indian labourers and followers participated in strikes and other collective actions. She also lets us hear the voices of the European recruiters as well as the those of the recruits.

Inevitably, war changed the men. The book’s final chapter focuses on the men’s homecoming and their transition from military service to civilian life, as many changed their attitude to colonial subordination, nationality and the organisation of society. Finally, Radhika Singha reflects on commemoration and what she calls the ‘counter–commemoration’ of the Indian labourers until today. This is truly a global history of the Great War, taking the reader beyond the geographical and chronological confines of the Western Front between 1914 and 1918. It links India with Europe and with Mesopotamia in a persuasive demonstration of transnational history writing. Such a book is not easy to write. The working and living conditions of non–combatants do not feature prominently in archives, especially those concerning Indians in Mesopotamia and Persia. The author’s research ranged a large body of different sources throughout the world, and included official records, newspapers and private papers. The Coolie’s Great War is a labour of love, ten years in the making. It is a book which deserves a readership just as extensive.

[This review first appeared in the April 2021 edition of the journal of The Western Front Association Stand To!]