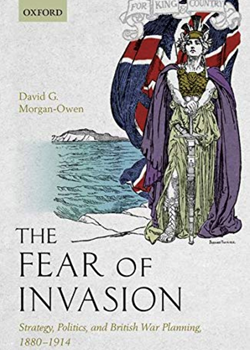 [This review first appeared in Stand To! November 2018 Ed. 113 'The Armistice Remembered. Stand To! is the journal of The Western Front Association and is now published four times a year].

Occasionally a book comes along that offers important new insights into a supposedly familiar subject. David G Morgan–Owen’s masterly The Fear of Invasion is such a work.

His subject is British strategy and war planning before the Great War. As he rightly argues, previous historians have been too ready to portray the Army and Royal Navy before 1914 as locked in a struggle for the soul of British strategy, championing ‘Continental’ and ‘Blue Water’ approaches respectively.

In reality, the situation was much more nuanced, not to say confused. The two services were indeed frequently at odds, and the Committee of Imperial Defence – which was meant to coordinate efforts – was not particularly successful in this endeavour. The author argues that the Admiralty partially ‘filled this void’, stressing defensive over offensive operations after 1910 and thus ‘creating a degree of coherence within British strategy as a whole’, by moving towards the Army’s position somewhat. As we shall see, this stance was not without consequences.

Neither the Admiralty nor the War Office escapes criticism. Morgan–Owen argues that the General Staff’s concentration on sending an army to the continent to fight alongside France effectively ruled out serious planning for the use of the BEF in an amphibious role. In August 1914, this contributed to the failure to send Sir John French’s small army to the Belgian coast to attack the flank of the advancing Germans. I must say that my study of the subject has led me to believe that this was the right decision, but Morgan–Owen makes a powerful case that the alternative – what today would be called ‘joint operations’ – was never properly considered. Turning to the Admiralty, Morgan–Owen condemns ‘Jacky’ Fisher, the First Sea Lord, as being ‘irresponsible and short sighted’ for knowing that the RN would find it increasingly difficult to protect the British coast against German raids (a full–scale invasion was never on the cards), but deliberately downplaying this to his political masters.

The ultimate responsibility for the poor state of British war planning rests with the government. Balfour’s Conservative ministry emerges with some credit, although also with some brickbats. Asquith’s Liberal government comes in for severe criticism, for failing to coordinate the two service ministries, and allowing the default position of strategy to be the protection of the UK against German invasion. This led to poverty of thinking about Britain’s strategic options in 1914. Reflecting the title of the book, in 1914 the Royal Navy, the world’s greatest war fleet, was used to defend Britain rather than being used offensively. Morgan–Owen questions whether the trade–off, the small BEF being deployed to France, was worth it.

The Fear of Invasion is a challenging book, which has, at its heart, the question of whether the eventually huge British commitment to the Western Front was inevitable, or if in 1914, there was a viable alternative. As David Morgan–Owen rightly says, whether an amphibious strategy in which the BEF was used as projectile fired by the RN at the flank of the German advance would have been better is unknowable: personally, I suspect not.

The achievement of this impressive book is to show how pre–war failures of planning by the army, navy and government ensured that this was a road not taken. Instead, Britain set out on the road that led through Mons to a mass army and Continental–scale land battles.