The First Battle of Britain 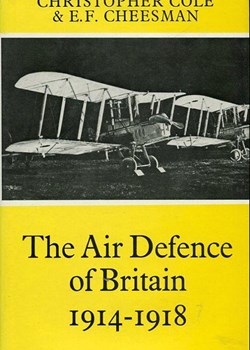 There were 118 German air-raids against Britain during the Great War. Some 270 tons of bombs were dropped, 1,414 people were killed and 3,416 were injured. This effective aerial threat brought about the development of a British air defence system that by 1918 had become remarkably sophisticated and successful.

Messrs. Cole and Cheesman tell the story of this development with great clarity and in remarkable detail that is obviously the result of painstaking research work that it would be difficult to overpraise. Each raid is described in full with every aircraft making a defending sortie recorded. There are over 300 photographs, many of which will be entirely new to even the most dedicated RFC expert.

However, it is very important to note that the title, The Air Defence of Britain, is absolutely accurate and the authors are indeed telling only half the story of the defence of Britain against air attack during the Great War.

As they themselves clearly state "Ancillary services — the guns, searchlights and the observer organization - and detailed effects of the bombing are dealt with only briefly."

While the authors can be justifiably proud of their claim to have studied more than a thousand files in the Public Record Office, their failure to cite the references of any of these files can only be deprecated.

[This review first appeared in the Winter 1984 edition of Stand To! This, regular book reviews, numerous articles and veteran memoirs and diaries make up the rest of the edition. Archived copies of Stand To! are available online to members].