The First Great Triumph: How Five Americans Made their Country a World Power by Warren Zimmerman et al. 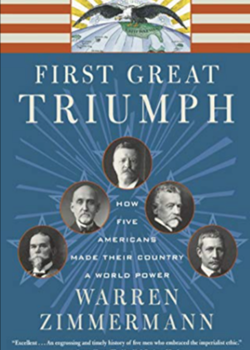 All but Mahan (a naval officer) were involved in national politics. Two were Secretaries of State (Hay and Root). Two (Roosevelt and Root) won the Nobel Peace Prize. Two (Lodge and Root) were US Senators; Root was also Secretary of the Army. Two were widely read historians and political theorists (Roosevelt and Mahan) whose works are still in print. One, the multifaceted Roosevelt, was inter alia a war hero, Governor of New York, Vice President and President of the United States, the first 'imperial' President in any sense of the word. The best part of this book are the lively and carefully crafted biographies of the protagonists, all major political figures in late nineteenth and early twentieth century America. The author avoids ideological cant and produces unvarnished judgments on his main characters as well as on a large supporting cast. In sum, Roosevelt and his four political friends and allies laid the firm basis for the internationally activist administrations of Woodrow Wilson, Franklin Delano Roosevelt, Harry S. Truman, Dwight D. Eisenhower, John F. Kennedy, Lyndon B. Johnson and their successors that marked the American Century.

[This review first appeared in the September 2005 edition of Stand To the journal of The Western Front Association].