The French Army at Verdun : new from Pen & Sword and their 'Images of War' 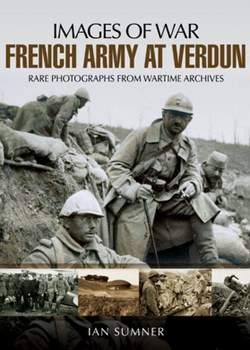 … just a gigantic chaos of rubble, food, furniture, clothes and books, lost amid the stones. All that remains is a bell tower in danger of collapse and a cemetery with tombs ripped open and crosses smashed.

Such was the skeleton of the village of Fleury, as described by Romain Darchy of the 408th Infantry, on its recapture by the French in August 1916. Looking at the photo of troops organising their defensive positions I found it difficult to see much difference between the supposed trench and the ‘chaos of rubble’ referred to. This image and similar ones on the same page brought home to me the scale of the destructive forces at work. Often when ‘Verdun’ is mentioned my mind tends to picture scenes of small groups of soldiers fighting in dark underground chambers. These photographs in Ian Sumner’s book remind the reader that somehow troops lived (and so many died) amongst a desolate wilderness created by men and their infernal machines.

Sumner opens with a brief synopsis of the path to this mighty clash between the armies of France and Germany. The battles of Verdun began in the early days of the war when French Third Army under General Pierre Ruffey was driven back in retreat towards the circle of forts. The consequence of this failure was that the French commander-in-chief Joseph Joffre sacked Ruffey and replaced him with General Maurice Serrail. In front of the forts the new commander contested a punishing series of fights with German Fifth Army but his forces were squeezed hard from both east and west. The outcome was a French-held salient pushing deep into German lines. Further enemy pressure led to the creation of a corresponding German salient to the south which meant that Verdun’s major rail link in that direction was cut.

Crucially, given what was to come, although Joffre wanted to pull back from the fortress, Sarrail was now putting himself forwards as the ‘Saviour of Verdun’ and so withdrawal was no longer an option politically. As 1915 wore on the French leadership downgraded Verdun from ‘fortress’ to ‘fortified region’: the Région Fortifée de Verdun (RFV) was commanded by General Frédéric Herr under the Central Army Group. The desperate need to reinforce the heavy artillery strength of their armies also led to a decision to strip fortresses of their guns for redeployment to operations elsewhere. Verdun was left as a poorly defended salient in a flood prone valley surrounded by hills and with limited road and rail links.

This background forms the opening chapter for this latest publication in Pen & Sword’s Images of War series. The series promises ‘copious use of collectors’ graphic and rare contemporary images, supported by authoritative captions and lively text’ in the words of the publisher’s website and The French Army At Verdun delivers on all counts.

The author is now a full time writer and researcher whose particular areas of study include the French army in the First World War; a quick look on the web found that he has also written books on other aspects of military history including the Indian army and air warfare. Ian Sumner lives in the East Riding of Yorkshire, which is also the subject for other of his written work.

In 1916 the German commander-in-chief General Erich von Falkenhayn launched his plan for a decisive blow to bring an end to the war on the Western Front. His aim was no longer to breakthrough but to break-in at the Verdun salient – forcing the French to counterattack over killing fields dominated by German firepower – causing such an exhaustion of French men, materiel and morale that its government would sue for peace. On 21 February 1916 the German artillery began its bombardment.

Following his short opening chapter Sumner proceeds to group the subsequent action into four sections; Titles such as The Road Must Hold and Sacrifice And Glory are phrases that appeared to me to sum up the nature of the epic struggle that took place. In common with this series of books, each chapter consists of a short description of operations during a particular period of the campaign – followed by a long section of contemporary photographs. The photos are comprehensive in scope, probably owing to their provenance: the collections of the Bibliothèque de Documentation Internationale Contemporaine, Nanterre, France.

Each photo is accompanied by detailed captions written by the author. Many of these use the photo as a prompt for further commentary on the fighting or for the use of a quote from a contemporary source, often by a soldier caught up in the maelstrom.

As well as dealing with a particular passage of time during the battle, each chapter also has certain themes within the collection of images used. For instance chapter three, while concentrating on Petain’s time in command of the fortresses’ defences, also provides a series of photos to illustrate the various medical facilities available to the French troops. I was interested to learn of the volunteer ambulance drivers from America and in particular from SSA18, a British Red Cross ambulance unit – and its ambulance which was funded by Derbyshire and Nottinghamshire Coal Owners. This chapter also features images of the crucial road transport link to the French defenders, La Voie Sacrée; plus a few pictures of the French poilu enjoying a short period of recreation, either bathing or watching improvised theatre.

One small niggle (and a common complaint from myself) is that there are no footnotes or references, although the sources for quotes and extracts are normally named in the text or captions. I was also disappointed to find no bibliography or suggestions for further reading.

As someone not overfamiliar with Verdun I also would have found more than the single map included useful to follow the progress of the battle and to help locate some of the scenes featured in the photographs.

Overall I found this book to be a useful addition to the Verdun canon, with many photos not previously known to me. There is much to interest the general First World War reader particularly in the dramatic illustration of the soldiers’ experiences. One can feel how small a single man is amidst the shattered ground and blighted landscape. The wealth of images should also appeal to those with a more specialist knowledge of this decisive battle.