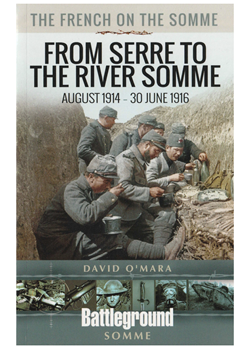 This is the second of five books about the French Army on the Somme planned by David O’Mara. His first, covering the French action on the Somme in 1916, appeared in 2018 and provided an outstanding introduction to what is, for many British visitors, a little–known subject. The area covered by this work will be better known but visitors who follow the walking and driving tours so clearly described in it will see it with new eyes.

Starting with the German invasion of 1870 during the Franco–Prussian War and the Battle of Bapaume of 1871, which is accompanied by a useful car tour, the author covers the period between 1871 and 1914 and includes the activities of the Péronne–based 120th Infantry Regiment and takes the reader up to the present day. In addition to its unusual historical sweep, the book contains a great deal of valuable, and interesting, detail about French Army organisation between the wars, which nicely fills in the background. With that firmly established, he considers the German invasion, the northern actions of August – September 1914 and the period of stabilisation in September and October during the so–called ‘race for the sea’, all are periods which have traditionally received little or no coverage by British authors.

There is a splendidly detailed section on the Battle of Toutvent Farm – the original spelling – and much fascinating information on mining, an aspect which this reviewer was unaware had been a feature of 1914 on the Somme. Also included are sections on the fighting for La Boisselle and Ovillers in early 1915 and many other places, the names of which, sadly, were to become all too familiar in 1916. Chapters on the area between Hébuterne and the River Ancre and between the Ancre and the Somme take readers up to 30 June 1916, where the author leaves them with the rhetorical question ‘What could possibly go wrong?’

The walking and driving tours are clearly described – and thoughtfully well mapped. The appendices are a mine of information which ranges from the organisation of the French Metropolitan Army and the corps du génie – the Engineers – whose part in the war cannot be underestimated. Other appendices cover the French Orders of Battle for the period, French Army rank structure and army abbreviations (valuable in interpreting all those pesky RCA’s, RICM’s and RTM’s to be seen on headstones) and, helpfully, lists not only French military cemeteries (Nécropoles Nationales) but also those of the CWGC in the area which contains French war graves. The German side of the action is also covered and a useful epilogue deals with the gradual British takeover of former French positions, the Chantilly conference of December 1915, and discussions concerning the coming Somme offensive.

Any visitor interested in what happened in the area between Serre and the Somme between 1871 and 1916 will find this a fascinating book. Warmly recommended. Christina Holstein

This First World War Book Review first appeared in the October 2019 edition of the journal of The Western Front Association Stand To! Edition 116.