The Gallipoli Oak by Martin Purdy and Ian Dawson 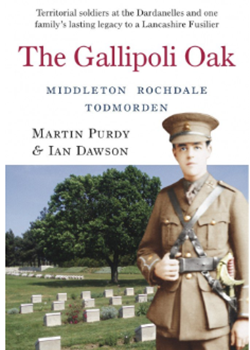 A masterful and poetically told story that reads as easily as Michael Morpargo and is just as visual; here however the authors are relating fact rather than fiction. The Gallipoli Oak has everything for the person interested in the lives, service and untimely death at a young age of a soldier of the British Army. If it isn’t a short film or documentary it should be. It has the arc of a classic tale of misadventure. I read with growing dread as each of the principal characters are introduced with some warmth and colour in the first chapters knowing that their demise will be the climax and end.

For an introduction to the Gallipoli Campaign and the First World War in general, I cannot recommend The Gallipoli Oak more highly, it is a compelling read that has had me turning the pages barely without a break, and certainly later into the evening than I had expected. Not ever having considered a trip to the Dardanelles, despite many holidays to Turkey, this could be the book that convinces me to go, with a visit to the living memorial of the ‘dwarf-like’ British oak surviving the Gallipoli climate the primarily goal, rather than battlefields, cemeteries and other memorials.

As I read, forever studying the First World War, I label spots, lines and pages with ever-useful miniature Post-Its for future reference. When I mark out multiple moments on almost every page for later reference the exercise becomes self-defeating - I’m going to want to read again from the beginning as soon as I get to the end.

The story begins, ominously, with the death of a young man who drowned on the annual trip by members of theTerritorials to Prestatyn. The funeral of Leonard Fitton, 18 years of age, foreshadows the many deaths that will be reported imminently and barely commemorated as men are buried close to where they die.

I won’t take you through The Gallipoli Oak page by page; that would be less of a review and more like my sharing school notes. Speaking of which, I’d put this in front of budding historians at school. Let them take notes, highlight passages and in this volume get the different levels of focus that are required to understand the Great War, from decisions made by Governments (the Haldane Reforms), the context in the country and locally (education and working life), to the individual’s experience of enlistment, training, mobilisation, active service, death (for some) and commemoration.

A few chapters in and I pause to browse the section of photographs in the middle, to put faces to a number of characters now introduced. As I continue to read I go back to these pages several times to take in the face. I’m not about to meet them in the street, but if I did, I rather think I would recognise Lord Rochdale, Eric Duckworth, the Rev Fletcher and Ernest Laws and Charles Watkins. They are brought to life.

I look forward to the movie that I see in my mind’s eye, as the middle-ages James Duckworth’s struggles to get a sapling oak out to Gallipoli in a bucket of wet soil the thread holding it together. I reflect also, the father of a 21 year old son, how I would respond were he to die tragically.

To add to my delight, turning off all electronic devices, as I now feel I must do if I am to relax, I opened The Gallipoli Oak to find a note from one of the author’s. I hadn't realised when I clicked through the order that I would be going straight to the man himself. Many thanks Martin!

I notice there is a song from Harp and Monkey ‘The Gallipoli Oak’, I'll take a listen, but let’s also get this film made!