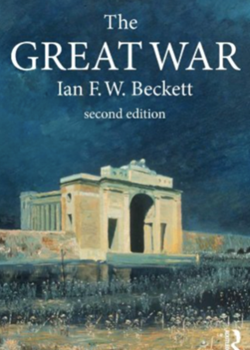 There have been some important works on the Great War published recently; the first volume of the new history by Hew Strachan is reviewed elsewhere in this issue, and we have a new contribution of great merit from Gary Sheffield. Ian Becket is a great military historian and a very fine writer and I happen to agree with almost everything he writes here. The book, he says, 'goes some way to demythologising the popular memory of a war which is widely misunderstood'. He chooses the thematic approach to the history rather than the chronological and introduces us to the enormous amount of new research which has expanded academic knowledge, taking 'the new military historians into so many new and exciting areas'. Ian gives an excellent analysis not only of the purely military events, but the impact on the strategic, political, economic, cultural and social aspects, the effect on the world and the radical change that the war and its use of new technology brought about in people's lives, as well as the political changes that followed.

Of great importance to me are the superbly informative footnotes after each chapter. For example, the chapter on 'Westerners and Easterners' is supported by no less than twelve pages of references to support the arguments. The chapter entitled 'Wastelands' deals with memory and commemoration, war and culture and it contains some brilliant analysis of the literature and other art forms. The essay on 'War and the Silver Screen' and the sadly rather short section on 'War and History' are gems in their own right.

The author should have the last word: ‘The myth of the Great War is still routinely invoked in the British national Press. By contrast, academe's image o f the war has been transformed in the past fifteen years or so and a broad historical consensus has emerged, taking the war out o f myth and returning it to history. Historians have almost arrived at that point looked forward to by Brian Bond when the war would be studied 'simply as history without polemic intent or apologies.' Unfortunately, among the public back in 'Blighty' it is seemingly for ever 1 July 1916.' If it is as widely read as it deserves, this book should put them to rights.