The Indian Corps on the Western Front Handbook and Battlefield Guide 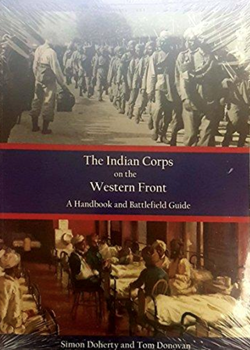 [These reviews by John Battersby first appeared in Stand To! No. 104 September 2015 Special Edition. Available in the digital archive to WFA members].

‘Soldiers of the Indian Army Fell Near this Spot’.

When you visit the rue de Baquerot Military Cemetery Nos. l & 2 you are in the presence of some of the greatest fighting men the world has ever seen; men like 5735 Sepoy Isha Singh of Queen Victoria’s Own Corps of Guides (FF) Lumsden’s who fell on l March 1915 These were the creme de la creme of fighting men.

Formed after 1857, they were a mobile force able to travel throughout the North West Frontier, probably the world’s most difficult terrain, and with its hostile tribesmen. They were unbeatable and the first soldiers to wear khaki uniforms. Or what about 3073 Sepoy Kartar Singh of the 34th Sikh Pioneers (killed 23 November 1914). The 34th Sikh Pioneers were comfortably installed in Ambala, Lahore and Sialkot when the Imperial General Staff in Whitehall set in motion the formation of an Indian Corps to fight overseas. Within weeks the Pioneers found themselves fighting as infantry with the Lahore Division to stem the flow of the Germans in their endeavour to reach the Channel ports. The Lahore and the Meerut Divisions were made up from these fearless men from all the great warrior tribes of the Indian sub–continent – Gurkhas, Garwalis, Dogras, Baluchis, Jats, Sikhs and many different Pathans, Afridis, Wazirs and Khans.

They were transported in small, uncomfortable ships to Marseille with their horses, guns, mules, construction tools and, most importantly, the ability to feed men of such disparate religious backgrounds. Fighting in the appalling winter conditions at First Ypres, Givenchy, Neuve Chapelle Aubers Ridge and Festubert, in waterlogged trenches and without artillery support, bombs, mortars or machine guns and inadequate winter clothing, the Indian Corps performed amazing feats of bravery.

This is produced by the French interest group l’Alloeu Terre de Battailles, 1914–18 (ATB). The President of ATB is Bertrand Lecomte, who lives in Laventie from whom copies can be obtained – email: bertrand.leconte4@wanadoo.fr

The book is in French with a centre section in English. There is comprehensive coverage of the British historical association with India and excellent accounts of the battles from Bois Grenier to Givenchy. Full details of the Lahore and Meerut Divisions, brigade and regimental units are given, including all details of the two British regiments per brigade and the ‘Order of Battle’. Indian Cavalry were also present in those early battles with King George’s Own Central India Horse in the trenches on 11 January 1915 between Festubert and Givenchy. 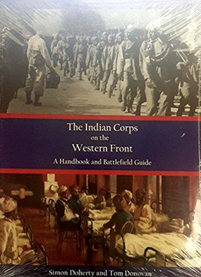 The Indian Corps on the Western Front Handbook and Battlefield Guide by Simon Doherty and Tom Donovan, Tom Donovan Editions, Hardback: ISBN: 9–781–905–968–084 £35.00 plus p and p (also in paperback at £20.00 plus p and p). This is a well–researched and written account and guide to the Indian Corps in those crucial early days of the war. Whether you intend to visit the region or follow the fighting from home, this is essential and enjoyable reading. Even better, take your bicycle and the paperback edition and wander the whole area, with a good lunch in the fishing lake cafe in Violaines, (No hills!) 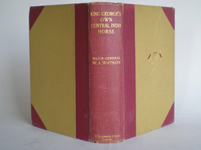 This book shows the depth of close family ties in the Indian Army and how it was virtually wiped out in 1914 and 1915.

The CIH nevertheless served in North Africa and Italy during the Second World War and still exists in today’s Indian Army.

The controversial resignation of General Sir James Willcocks as commander of the Indian Corps in September 1915 will be debated for years to come as will the transfer of the Corps to the Middle East. Many believe General Willcocks, possibly the most experienced commander on the Western Front, was trying to protect the Indian Corps from further unsustainable losses and destruction as a fighting force that had no reserves. 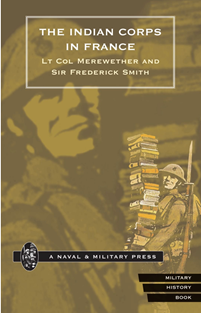 All that said The Indian Corps in France by Lieutenant Colonel J W B Merewether and Sir Frederick Smith (1919) is still THE book to own on the doings of the Indian Corps on the Western Front.