The Kaiser’s Reluctant Conscript: My Experiences in the War 1914-1918. Richert, Dominik. 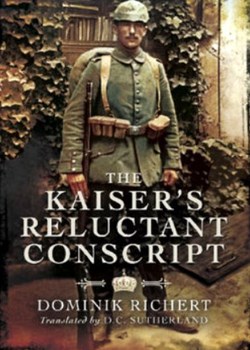 Born in 1893, Dominick Richert had completed less than a year of his compulsory service with the German Army when war broke out in August 1914. Almost five years passed before he returned home. His experiences during the intervening period were almost unbelievably eventful. He participated in the German invasion of France in 1914 and in the highly successful Gorlice-Tarnow Offensive against Russia in 1915. He remained on Germany’s Eastern Front, serving on relatively quiet sectors, throughout the middle years of the war; as an inhabitant of what had been, until 1871, the French province of Alsace, Richert was regarded by his superiors as unsuitable for long-term service in the west. He was transferred back to France only in 1918, when the Russian collapse permitted the concentration of all of Germany’s available manpower on the Western Front for Ludendorff’s ambitious Spring Offensive. As an NCO in his battalion’s machine gun company, Richert fought in several battles early in 1918, including the encounter between German and British tanks at Villers-Bretonneux – probably the first clash between hostile tanks in history. Having long since come to the conclusion that Germany could never win the war, he deserted – accompanied by two other soldiers – in July 1918. He spent the last few months until the armistice in French captivity, finally reuniting with his family (whose home had since been reincorporated into France) in January 1919. A few years later, Richert – like many other veterans of the Great War – set out to record his wartime experiences in detail. This book was the result. It remained almost completely unknown until the manuscript was discovered in a German military archive in 1987. It has since been published in German and French. This edition, translated by D. C. Sutherland and published by Pen and Sword Military, marks the work’s first appearance in the English language.

The Kaiser’s Reluctant Conscript is a very welcome addition to the literature of Great War memoirs. Richert’s writing is unique in several respects. In the first place, as an Alsatian, he seems to have remained at heart an outsider within the German military (and within the German Empire as a whole). His attitude toward the supposed righteousness of the German cause was skeptical at best. His only consistent loyalty throughout the war was to his immediate comrades. He comments in the book on a number of occasions on the emptiness of the ideals for which he and his fellow soldiers were supposed to be fighting. He professed to harbor “a secret anger against all officers from lieutenant upwards,” noting bitterly that they were privileged to “[live] in better conditions, were better fed, and, to top it all, were better paid, while the poor soldier had to go through the whole misery of the war ‘for the Fatherland and not for the money, hurrah, hurrah, hurrah’ as one marching song has it.” This was, he suggested, not an unusual sentiment: “We soldiers from Alsace did not have a trace of love for the Fatherland…” (142). This attitude led Richert to engage in a number of activities that, if detected, would have resulted at least in his imprisonment. Yet he had an exceptional talent for deception. Indeed, his survival until the end of the war no doubt owed a great deal to his tendency to go AWOL at opportune moments, to feign illness and to land himself relatively safe assignments.

That is not to say that he had anything like a comfortable time in the army. On the contrary, he faced extreme danger on numerous occasions – frequently for weeks or months on end. The opening months of the Great War were particularly horrific. Richert’s regiment participated in the Battle of the Frontiers and was later condemned to engage in trench warfare against the Indian Army in northern France. During all of these events, Richert generally found himself, rifle in hand, on the front lines. He watched as all but five of the original 280 men in his company, who he had trained with and who were sent into France in August 1914, became casualties by the end of the year. The events of 1915 appear to have been similarly grueling, as Richert fought along through large swathes of Russian Poland. The challenges that mobile warfare posed to the individual soldier were, needless to say, largely unknown on the Western Front between the opening battles in 1914 and the final offensives in 1918. Even in 1916 and 1917, when he was fortunate enough to avoid direct involvement in the materialschlachten of Verdun, the Somme and Passchendaele, Richert still endured serious privations. In these circumstances, cold often posed a more immediate threat than the Russians, whose willingness to surrender commonly caught their German opponents by surprise. Yet Richert still experienced moments of fierce combat, for example during operations leading to the capture of Riga in late 1917 – where the German army demonstrated the effectiveness of the mature form of infiltration (or stormtroop) tactics, which had been gradually developed over the course of the war. In 1918, Richert witnessed firsthand the overwhelming material superiority of the British, French and American forces – which contrasted sharply with the condition of near-starvation that obtained within the German Army at that time.

Richert’s memoir is not in the same league as more deliberately crafted “war books” by Erich Maria Remarque, Robert Graves or Siegfried Sassoon – although it does somewhat resemble the straightforward narrative of events found in Ernst Jünger’s Storm of Steel. Its simplicity and apparent honesty is nevertheless valuable. The reader is left with the powerful impression that the events described in the book are presented precisely as Richert remembered them. They do not seem to have been embellished or selectively arranged for dramatic effect. But is this the case? The translator’s introduction gives very few details about the work’s composition – probably almost nothing is known. The work seems astonishingly detailed for a memoir. Richert is able to describe the course of events during particular battles almost minute-by-minute. It is not impossible that he could have done this from memory, yet it seems far more likely that he was working from a diary kept during the war itself. This is only speculation, however, as no diary is mentioned directly in the text. The details that Richert does provide, however, do seem to be demonstrably accurate. The translator’s footnotes, found throughout the text, provide useful explanations of obscure terms and background on events alluded to in passing. In only a few places does the translator offer a correction to any of the author’s claims.

The translator, D. C. Sutherland, has indeed done exceptionally good work. Richert’s German is rendered in clear and readable English. The text is also accompanied by a map of Europe tracing Richert’s movements throughout the war. This is exceptionally useful for the reader, and a very welcome inclusion. Except for the fact that the book lacks an index, it is a superb production in every respect. Overall, while Richert’s work will never become part of the canon of Great War literature, it will nevertheless serve as a useful account of the First World War for anyone interested in the perspective of a member of Imperial Germany’s Alsatian minority. The work will also interest anyone seeking to understand the experience of the individual German soldier on the Eastern Front.