The Lusitania, the Life, Loss and Legacy of an Ocean Legend by Daniel Allen Butler 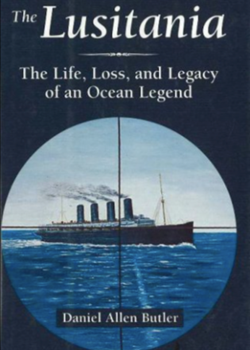 Even at this late date, the Lusitania continues to intrigue. A single, unreliable bronze torpedo from a German unterseeboot sank the mammoth British liner in May 1915, some three months after the Germans had announced an unrestricted U-boat attack of merchantmen of any nation in a designated 'war zone' around the British Isles. Some say, incorrectly, that it was a decisive factor in bringing the United States into the war two years later.

In this excellently written book there is plenty of well-researched information. However, it seems that no author is willing to accept the simple supposition that the ship was poorly conned as it reduced its speed to about 20 knots in dangerous, U-boat patrolled waters off the southern coast of Ireland to arrive at Liverpool on a timely tide and that U-20 happened on the Lusitania quite by chance. There is no reason to believe, for example, that Kapitänleutnant Walther Schwieger, 30, commander of U-20, had any intelligence information on the arrival time of the famous luxury liner; he was simply patrolling the busy sealanes as assigned. His fuel was approaching a crucial point and he was preparing to head for Wilhelmshaven when he spotted the ship in the foggy seascape. And, in fact, he was reprimanded by Admiral von Muller, as instructed by the Kaiser, for creating such a public relations dilemma, as opposed to being decorated for his outstanding naval leadership.

There were blunders, too, such as the British placing an embargo on any news releases just hours after the disaster, implying that the ship was carrying contraband. Much has been made of this. The truth is held in the 'supplementary manifest' which was never made public, but rather is said to be the oldest secret document held in the National Archives, marked 'FOR THE PRESIDENT'S EYES ONLY'. There were many diplomatic note exchanges and much pure propaganda on both sides, but the submarine procedures of the day did not call for stopping and searching vessels, especially after the Captain Charles Fryatt incident two months earlier where the steamer Brussels tried to ram U-33 in the Channel. One can argue the case either way.

The author has produced a book full of fascinating detail, raising some inescapable questions about perhaps the most famous and enduring event of the war. More than 35 other books have been published on the Lusitania affair, some romanticizing the calamity, but this book goes further into analysis, usually expressing the author's opinion as well. One should properly ask: How did this sinking affect the war? Once the secrecy and disinformation are removed, one sees at least two major factors emerging: the U-boat threat and the negative effect on German-Americans.

Germany had a stranglehold on Britain with its decision to wage unrestricted U-boat warfare, for within three months of sharply curtailed merchant shipping trade Britain would have to vacate the war or starve. On the other hand, Britain aimed to do the same to Germany in blockading the North Sea and the Channel. Now came the devastating U-boat threat. Secondly, the author thoughtfully addresses the despicable American reaction to the Lusitania which was a relentless bias against German-American citizens, yet another tragedy, and one that most writers tend to sidestep neatly.

Nevertheless, it was the sinking of the luxury liner that intensified an American habit of perceiving other nations according to stereotypes of national character. President Wilson had tried to prevent ethnocentricity from leading to a universal loathing of every aspect of German life, but the fire swept the nation. The ill treatment of millions of German-American citizens was a disgrace, constantly excited by the press, that lasted throughout the war and is properly part of the story. This book is good value and highly recommended.