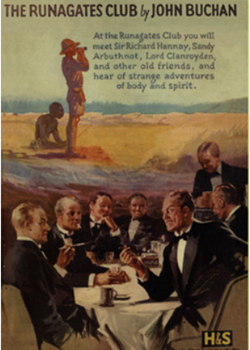 In John Buchan’s The Rungates Club (Handheld Press, £11.00) old friends, survivors of the First World War, meet. Among them are heroes of other famous Buchan novels: Richard Hannay, Edward Leithen and Sandy Arbuthnot. The themes of the 12 tales are varied. Three describe rational men encountering primeval, supernatural forces to their own cost - a theme which Buchan explores in other works - suggesting that the war had unleashed a dangerous energy which continued to threaten civilisation. Perhaps the strongest, ‘The Wind in the Portico’, features a classical scholar whose research brings him into contact with a country squire who incorporates an ancient altar to a British incarnation of the god Apollo in his house. In the terrifying triumph of the god and the resulting conflagration the squire loses his life, the scholar his manuscript and life’s work. Buchan adds, ’Six weeks later, the War came, so I had other things to think about.’ An excellent introduction includes the histories of each tale. Buchan’s masterly ability to create atmosphere and character ensure each of these stories, varied in subject, stand in their own right and are classics of the genre.