The Russian Army and the First World War by Nik Cornish 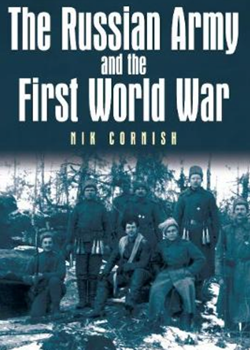 The role of Russia and its army in the Great War is both poorly understood in the west and relatively poorly documented in English. This new book by Nik Cornish, an historian of the Russian Army - whose expertise as a picture researcher, is also underline in this new work - offers a valuable antidote. It plainly meets his stated objectives to provide ‘a reasonably clear introduction to the Russian Army of 1914-18 and events on the Eastern front during that period’ fully. Published by Spellmount - in its usual clear, crisp style - and illustrated with an admirable collection of relevant pictures, the book reviews the entire Russian experience of war from 1914 until 1917 offering valuable appendices on the nation’s navy, air arm, artillery and use o f chemical warfare. In reviewing conscription and casualties, Cornish estimates that deaths of military personnel alone reached 2,006,000 whilst those amongst civilians were some 1,500,000. The complexity of the author’s task ‘to add lightness’ to his task is underlined by the sparseness of sources in English and his helpful bibliography notes both works in and out of print. Apart from providing a concise overview of the army, its structure, role and campaigns, the author’s outline of the complex events following revolution is admirably concise and clear. His vignettes of the principal actors in events, and their motivations, are equally impressive whilst the author's picture of the Germans' harshness in the Brest-Litovsk treaty in October 1917 underlines the fact that, by comparison, the Versailles Treaty was far less draconian. As an introduction to the war on the Eastern Front - and for its pictorial coverage, captions and overall concision - The Russian Army and the First World War deserves a loud cheer. This is a valuable primer written with commendable clarity.