The Sculpture of Eric Kennington by Jonathan Black 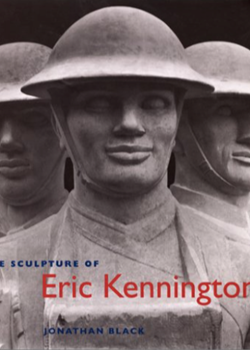 In my talk on 'The Soldier in Art' I have mentioned how under-rated Eric Kennington is, when compared with some of his more illustrious contemporaries. In my opinion, Kennington was able to draw the humble 'squaddie' like no other artist: he had been one of them himself, having served with the 13th Bn The London Regiment - 'The Kensingtons'. Their recruiting office happened to be just around the corner from Kennington's studio, off Kensington High Street. After basic training, he served for three months, from November 1914 to January 1915, around Laventie. In later life, he recalled taking part in the legendary Christmas Truce of 1914.

The Great War came to an abrupt end for him when, at the end of January 1915, while trying to clean a friend's rifle, he accidentally shot himself in the foot. He almost lost the foot to infection, and had to have one toe amputated. In June of 1915, he was granted an honourable discharge from the Kensingtons, and later that year painted a tribute to his former comrades entitled 'The Kensingtons at Lavantie'. This was an oil painting on glass measuring 54" by 63". There is a wonderful photo on p.79 of Jonathan Black's book which shows Kennington, in a balaclava helmet, carving a tombstone. This was possibly the same headgear that he wore when he portrayed himself and his comrades in the Kensingtons' painting.

This author has produced an excellent book which goes a very long way to restore Kennington to the prominent position he held as an artist and sculptor during and after the Great War. There are many studies and images in the book showing Kennington's great artistic talent. One example is the Portland stone sculpture to the 24th Infantry Division at Battersea Park, London, which commemorates the 10,865 men killed serving with the Division. It is one of my favourite memorials and should be seen by everyone as should the Memorial to the Missing at Soissons, to the men lost in the Battles of the Marne and the Aisne in 1918. There are also two preparatory drawings in charcoal for Kennington's PBI (Poor Bloody Infantry) and part of the plaster in low relief which is in the Wolfsonian Florida International University Museum. There is a great deal of information, including an excellent catalogue, bibliography and an index of Kennington's works. There are also many wonderful non-military images. I would, therefore, thoroughly recommend this book - a first-rate record which shows Kennington's works in the wider context of twentieth century British art.