The Sleepwalkers: How Europe Went to War in 1914 by Christopher Clark 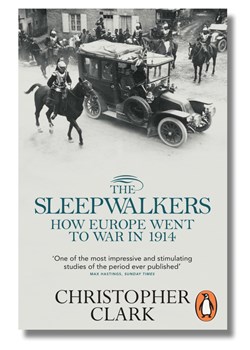 Clark is an Australian historian and the Regius Professor of history at Cambridge University. I first read his book in 2014 in an effort to move away from the usual British-centric works to which I found myself referring. Re-reading its small print over many pages has not diminished my respect for the author's skills as a writer nor for his scholarship.  The Sleepwalkers is an immensely informative and enjoyable book.

It is difficult to condense in a few hundred words this magisterial study of World War One. Clearly its focus is 'how' rather than 'why' and that is the germ of this engrossing and erudite study. Clark's analysis is insightful drawing together as it does the many strands of politics, alliances, personalities, geography; and fear and false hopes which together underpinned the last few years before 1914.

The cover of my copy shows a remarkably crisp photograph of Russia's Grand Duke Nicholas Nikolaevich on a visit to France in 1912 to observe the French Army's annual manoeuvres. He is being driven in a motorcar flanked by an escort of cavalrymen sporting plumed helmets and shining cuirasses. The imperial Russian flag flutters easily from the car − a sign of confidence and continuity of the old order. But for all the sense of stability and calm the photograph masks the fragility of great power diplomacy.  As Clark makes clear, the leaders and key advisors of four empires (and Serbia) would soon overplay their hand to find themselves on a runaway train to hell.

A central theme is the fraught, almost intractable, problem of the Balkans. Indeed the author notes that 'The First World War was the Third Balkan War before it became the First World War'. The machinations of the Serbian Government (often with Russia's tacit and covert support) and various interest groups in that country are carefully analysed.  But there were other factors at work: Italian colonial appetites in North Africa for example, further inflamed the pre-war geopolitical situation, as did lobbyists such as financiers and investors; not to mention the role of the press.

Clark highlights the ambivalence of international developments which left an increasingly beleaguered Vienna bereft of diplomatic options in the aftermath of Franz Ferdinand's assassination. It is this uncertainty in European diplomacy about the intentions of friends and potential enemies that grounds a good part of the book. The author notes that the polarization of Europe's geo-political system was a crucial precondition for the war that broke out in 1914. He captures the sometimes chaotic complexity and unpredictability of Europe's political and diplomatic environment which whirled beneath the deceptive calm of that last summer of peace.

In lieu of a bibliography the footnotes are exhaustive and informative. The carefully chosen photographs include not only the usual rogues' gallery' but lesser known key players; including delinquent ambassadors following their own agenda behind the scenes The Sleepwalkers is essential reading for anyone seriously interested in this conflict.