The Sons of John Company: The Indian & Pakistan Armies by John Gaylor 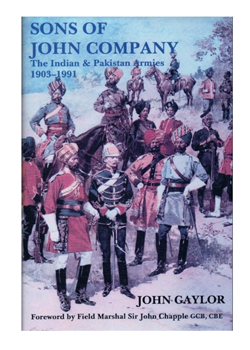 [This review first appeared in Stand To! no.51 January 1998. It is one of over 2,200 reviews of books about the First World War which are available to search in the Stand To! archive by members of The Western Front Association].

This is a very welcome book.

The contribution of the Indian Army to the British Empire's war effort between 1914 and 1918 is still curiously neglected. In sharp contrast to the proliferation of studies of British units which have appeared over the last few years, little work is being done on Indian regiments. We even lack a good modern general history of the Indian Corps on the Western Front, although Major Gordon Corrigan of the Gurkhas is preparing one. This is strange, given the vital role of the Indian corps in providing timely reinforcement to the BEF in late 1914, and its distinguished record on the Western Front - not to mention its subsequent involvement in Mesopotamia, and Palestine.

One reason for this neglect is perhaps the confusing order of battle of the Indian Army.

Regiments changed names and numbers with bewildering frequency. 57th Wilde's Rifles (Frontier Force), which played a prominent role on the Western Front in late 1914, became 4th Battalion (Wilde's) 13th Frontier Force Rifles in 1922, for instance. In Sons of John Company (the title, of course, refers to the nickname of the old East India Company) John Gaylor provides an admirably clear guide to the twentieth century Indian Army of the Raj and its post-Independence successors.

First published in 1992, this book contains a wealth of detail that will be invaluable to historians and collectors. Although it is primarily a work of reference, readers will find it fascinating to dip into; it is well worth having on your shelf.

The author, John Gaylor, is Hon. Secretary of the Military Historical Society, and copies can be obtained from him at 30 Edgeborough Way, Bromley, Kent BR1 2UA at a special reduced price for WFA members of £18, inclusive of packing and postage (cheques payable to John Gaylor). G. D. Sheffield