The Tanks at Flers : An Account of the First Use of the Tanks in War at the Battle of Flers-Courcelette, the Somme, 15th September 1916 by Trevor Pidgeon 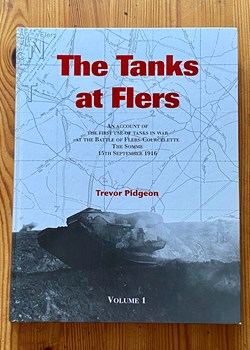 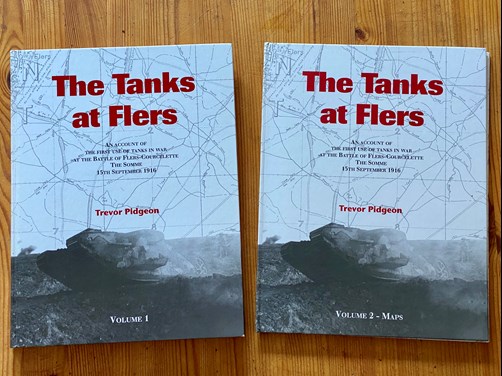 Considered a ‘masterpiece’ by the late Terry Cave who wrote this review in 1996.

In my capacity as editor and compiler of the Naval & Military Press (previously the London Stamp Exchange) Book Lists during the past nine years, many hundreds of books have passed through my hands for description and write-up, but never before have I been at such a loss for superlatives to describe a book as I am now in the case of this outstanding publication.

In it the author (a member of The Western Front Assoication and until recently the cartographer) sets out to make good what he perceives to be a gap in the recorded history of the Great War by providing a detailed account of the part played by the tanks on the day when they first went into action.

That day, 15 September 1916, was one which brought a new dimension to the land battle, and this book commemorates those officers and men of C and D companies of the Heavy Section, Machine Gun Corps (as the Tank Corps was then known), who were the pioneers of a form of warfare that was to dominate the battlefield in the next world war and beyond.

It is, indeed, a magnificent tribute!

This is the product of years of study, of researching British and German archives, war diaries, operation orders, correspondence and contemporary accounts and photography from both sides. The list of acknowledgments, the bibliography and the wealth of explanatory notes will give some idea of the breadth and depth of the work that has been put into the preparation of this unique and definitive record. It is a further tribute to the author and to his devotion to his subject that he has personally taken on the responsibility for the publication of his book and made it available for at least half of what a publishing firm would be charging. 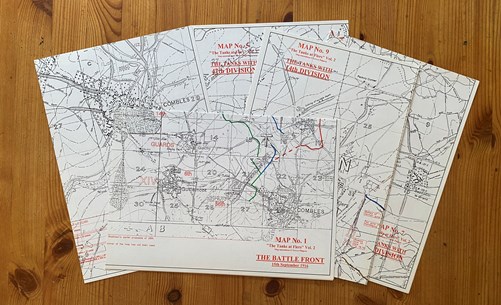 The volume of maps, large-scale trench maps, fold-out copies of the 1916 British originals, superbly annotated in colour, would alone be a bargain at £25. [1996 price].

The story begins with the genesis of the tank, its early trials and its acceptance into service, the selection of the crews and their training and the organisation to be adopted by this new arm - companies made up of four sections, each with three male tanks (armed with two 6-pounders) and three female (armed with Vickers machine guns) for a total of twenty-four tanks plus one spare. C and D companies arrived in France towards the end of August 1916, which left only two weeks for final preparations and the move forward to the front. Last-minute training, amounting almost to a series of demonstrations, was watched by Haig and his staff as well as by hundreds of other spectators - army, corps, divisional, brigade and battalion commanders; even Asquith turned up, as did the Prince of Wales. A special showing was put on for Joffre. And then it was into battle. 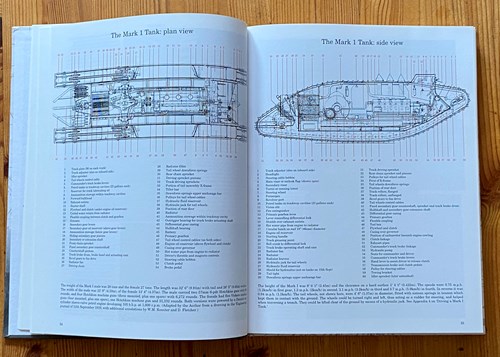 Individual chapters are devoted to each division, and the fortunes of the tanks fighting with them are described in meticulous detail with the help of the relevant trench map, which not only traces the progress of each tank in the battle, but also shows the British positions down to company level. Supporting this are aerial photographs in colour of the battlefield today, breathtaking in their clarity and definition, also annotated to describe pin-point movements and positions.

Each chapter, and this includes the early chapters, concludes with a Field Guide which takes the reader step by step over the ground as it is today so that on the battlefield he can follow in the tracks of the tanks as they went into action. It must be said that the book is not exactly a handy for extensive battlefield exploration on foot, its size and weight are against it. But then, that is not its main purpose; the field guides are a bonus and a very welcome one at that, and anyway much of the viewing can be done from the car and many of the locations reached the same way.

Trevor Pidgeon's cartographic instincts and attention to detail are such that directions and distances are given with a degree of precision that even the most disoriented orienteer could follow with ease.

The last three chapters provide the German view, the British view and a summing up by the author.

There follows a number of appendices including one which lists every tank and, where known, its crew with casualty details; another shows what each tank achieved in terms of attaining its objective, and yet another describes what was involved in driving the Mark I tank.

Others contain reproductions of correspondence and of orders and instructions from GHQ and HQ Fourth Army. And there is a very good index. 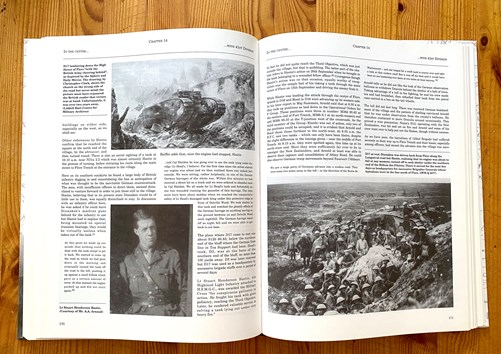 There are a number of features about this book which deserve special mention.

Even if you are deciding never to buy another book on the Great War, make sure you get this one first.