The Three Emperors: Three Cousins, Three Empires and the road to World War One 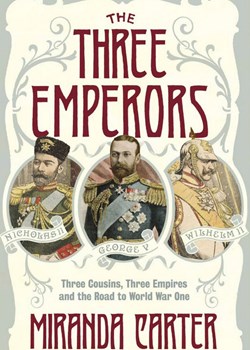 Miranda Carter reveals Wilhelm’s many lapses of tact and diplomacy. (I laughed out loud at many.) Nicholas II was weak, totally unfit to be an emperor, and was truly horrified when his hearty, huge father Alexander III died unexpectedly ,of Bright’s Disease aged 49. He married the woman he loved who proved unfit to be Tsarina of all the Russias. She was both crushingly shy and  uncomfortable with court life. She alienated Russians by seeking to hide away at TsarskoeSelo. The  couple’s reliance on Rasputin - when they learned that he was an haemophiliac - further alienated them from  court and populace alike..

Franz-Joseph of Austria’s problems were different. His empire was  ethnically diverse, court protocol stultifying and he his heir. Although Franz-Ferdinand’s assassination freed him of the later burden, he was too old to deal with war and I suspect from reading these books he knew the empire could not survive the war.

Miranda Carter’s book is written on a personal scale and examines in  depth the personal, familial relationship between the three cousins. George V comes across as a simple, rather brusque, manner, not  particularly bright, un demonstrative, and crushed by the war and the inevitable alienation of close relatives. The murder of the Tsar and his family was naturally a severe blow, but as, George V had back-pedalled on providing asylum for the imperial family, one wonders how much this preyed on his mind for the rest of his life. I have always wondered if the Empress Marie (the Tsar’s mother, who escaped) knew that this had been the king’s decision.

Once you start reading either of these books, it is so easy to see disaster lurking around the corner, particularly after 1870. Russell asserts that the fall of the monarchies destabilised Europe after ‘centuries of stability’, but it was more that  centuries of repression, industrialisation that made war inevitable war. Whilst I  disagree with many of Mr Russell’s conclusions, both books show causes of the Great War writ large. Both The Emperors and The Three Emperors are sound and enlightening.