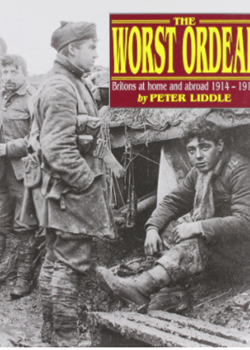 If I am right in believing that most WFA members are, like me, drawn to Great War photographs like moths to a flame, then Peter Liddle's latest offering will enjoy a wide readership. The Worst Ordeal covers a huge canvas - home and abroad, men and women, war enthusiasts and war resisters, soldiers, sailors and airmen. Geographically it reaches across the British Isles and beyond, to such places as Italy, Gallipoli, Mesopotamia, Egypt, India, the Cameroons and Russia.

The photographs are almost all taken from the Peter Liddle Collection at the University of Leeds, and formed the basis for an impressive photographic exhibition that was staged in Leeds in September 1994 as part of the International Conference 1914-18. The book does not only contain photographs; there are postcards and letters, Christmas cards and menus, logbooks and war diaries. The overall theme is that first articulated by Arthur Marwick - that war tests institutions, and is often the driving force behind fundamental social change - 'the locomotive of history.' So the book is divided into sections dealing with the early weeks of war, the Empire's response, warfare in distant parts, the home front (this section, in considerable and edifying detail), and finally 'The Test Withstood' - which includes an examination of prisoners and internees, and of the impact of the Armistice. (The photographs of the internee camp at Ruhleben complement nicely our 'War Art' feature in this issue).

A useful and perceptive introduction points out that not all aspects of the war involved hardship and suffering - 'There was money to be made in billeting soldiers. There were new opportunities for paid employment...there was social credit to be gained in doing welfare work...a rewarding feeling of adventure.'

One final point - personal testimony, whether written or oral, is often derided as being no more than one man's response, often flawed, perhaps ignorant and maybe frequently rehearsed to the point where it assumes a truth of its own; Peter Liddle is aware of this, and qualifies his use of such evidence with a firm caveat, but this is no reason to ignore or discount personal recollection. It is all part of the tapestry which, though as yet incomplete, is the best understanding to which we can aspire, and this book adds many colours, and a number of sizeable patches, to that tapestry.