This Bloody Place - With the Incomparable 29th 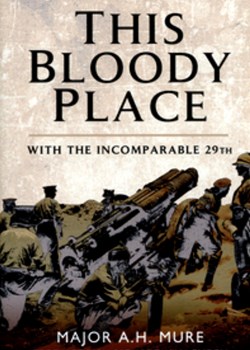 By Major A H Mure (Foreword by Richard Van Emden)

It would appear that the subtitle for this volume varies - it can read, 'The Incomparables at Gallipoli'.  This might be because, although the stylised photograph on the dust wrapper shows an artillery team firing an 8-inch howitzer one figure being in a pith helmet. Apart from that, there is nothing obvious to show that the book deals with Gallipoli rather than the Western Front, or that it is a memoir about an infantry regiment, rather than an artillery unit!

Albert Mure (then a Captain) was an officer in 5th Royal Scots, and spent six weeks at Cape Helles, being involved in the attacks intended to take Krithia and Achi Baba. He then suffered an emotional collapse and was invalided home, later serving with the regiment on the Western Front, where, it would appear from internal clues, some of this volume was written.

This Bloody Place is competently written, and gives a flavour of the trenches at Gallipoli - the inability to find safety from enemy fire anywhere, the difficulty of finding one's way around near the front in the dark or during daylight in what passed for rear areas!  Mure's description of his breakdown in the trenches under artillery fire (and the absolute randomness determining whether one lived or died) together with his personal awareness (or lack of it) during the period immediately preceding his final medical evacuation are fascinating.

There is no description of the campaign itself, or overview of the Royal Scots' role in it, in this memoir recounting personal experiences. Less easy-reading are the contemporary literary conventions used, and the somewhat paternalistic manner in which Mure refers to the soldiers in his Company. To quote L P Hartley in The Go-between, 'The past is a foreign country: they do things differently there'. Overall a well-written and interesting, but probably not a great, memoir.