Two Sides of the Same Bad Penny? Gallipoli and the Western Front, a Comparison 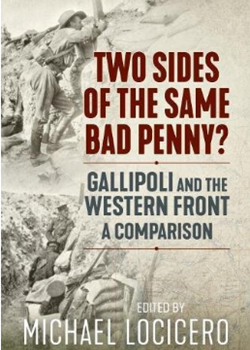 The sub–title – Gallipoli and the Western Front, A Comparison – suggests a comparative study of various aspects of these two quite different theatres of war. Given that the Gallipoli campaign was relatively short and that fighting on the Western Front raged for another three years – resulting in a transformation in tactics, weaponry and the British Army itself – one would have thought a true analogy between the two could best be made by confining the discussions to 1915. To do otherwise is like comparing a Clydesdale with a thoroughbred.

Of the twelve essays in this volume, only four take this approach: Gary Sheffield’s sound overview of subjects ranging from commanders, the quality of units and formations through to tactics and operational techniques; Rob Thompson’s fine study of the differing logistical systems; Stephen Chambers’ interesting foray into the approach to photography in each theatre of war and John Mason Sneddon’s comprehensive presentation on the development of grenades and mortars during 1915. Others take a longitudinal comparison from 1914 to late 1916. For three of them this is to be expected granted the subjects covered: The Royal Naval Division; the New Zealand Expeditionary Force and the AIF.

The remainder present an eclectic range of subjects, some merely touching on Gallipoli, few offering any real comparison. The best is Mark Connelly’s captivating appraisal of the use and influence of war films, both during and after the war and into the 1930s. Others deliver a narrative of a particular issue, traversing their development from 1915 onwards, or following the journey of particular units, yet their topics are not well known and thus add to our knowledge of the matters that are related. These include Andrea McKenzie’s narrative of the Canadian nurses, and Damien Finlayson’s study of Australian tunnelling from Gallipoli to the Armistice.

Despite this volume not being devoted entirely to a comparison between the two theatres of war, the wide range of subjects presented provide something for everyone – depending on their particular interests – or those keen to learn about widely different facets of the war. A few offer ‘old wine in new bottles’, where those familiar with the subject will find little new, except, perhaps, a differing perspective. Others present fresh insights into subjects rarely discussed or written about, and, hence, open a new window of knowledge into the multifarious nature of the Great War.

With the authors ranging from academics to amateur historians and battlefield guides, the essays vary in quality from excellent to adequate, or overly detailed. Most suffer somewhat from a lack of editing – typographical errors, words or phrases following one after the other. These should have been picked up. Nonetheless, this is a volume worth reading. Its contents materially add to our knowledge of various features of the war and differences between the main effort on the Western Front and the poor relations at Gallipoli.