Victory through Coalition: Britain and France during the First World War by Elizabeth Greenhalgh 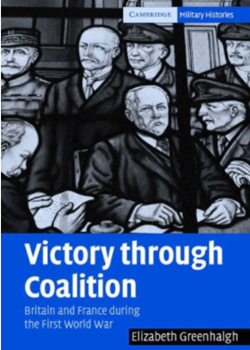 Ms.Greenhalgh is research fellow at the University of New South Wales and joint editor of War & Society. The author details and dissects evolution of the command and political relations between Great Britain and France, two nations with a history of enmity, competition and conflict in Europe and around the world.

Differences in language, culture, and military tradition divided these two allies; evolving democratic systems of governance united them in desperate struggle to defend their great power status against a powerful German threat. Initiated early in the century, staff discussions between the two Entente powers had fallen far short of joint planning to fight a coalition war. Only the transport to France and the deployment of the British Expeditionary Force there was planned in detail.

The rest was improvisation, an improvisation often marked by recriminations that continued for years. France was the stronger militarily in the beginning. Great Britain exhibited economic and financial staying power while French war industry established itself and the BEF swelled to nearly two million men.

Crises in command came in 1917 and 1918 and were met hesitantly and incrementally with first with the creation of a Supreme War Council then with the appointment of Foch as generalissimo with wide, but still constrained powers.

The Entente allies' search for solutions to the problems of command, logistics, supply and production were ultimately successful. Pooling supply and transport facilities was as important to success as was the formation of combined command under Foch in stemming the last-gasp German offensives and turning the tide of battle from stalemate to movement in 1918. But, it took two and three years of experimentation, trial and error and massive material and human costs to reach this war-winning level of cooperation and coordination. This tortuous process leads the author to ask in her final chapter: is coalition a defective mechanism for war fighting?