Wilfred Owen’s Shrewsbury: from the Severn to Poetry and War 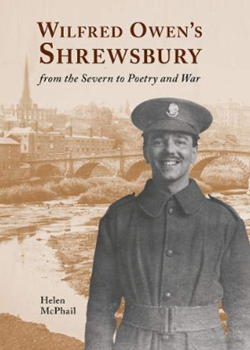 As the title suggests, Wilfred Owen’s Shrewsbury: from the Severn to Poetry and War, (Logaston Press, £12.95), places Shrewsbury as the main subject of this book. The author reconstructs its history and topography with many illustrations. Of wider interest is her focus on Wilfred Owen, whose family moved there when he was 14. His education was insufficient to gain the university career he so desired, but teaching English in Bordeaux gave him independence. On the outbreak of war Owen – detached from its realities in the south of France – even stated that the guns would ‘effect a little useful weeding’. In England, in May 1915, however, he recognised the need for patriotic involvement with war and told his mother, ‘I now do most intensely want to fight.’ Six months later, having returned to Bordeaux briefly to fulfil his commitments there, he enlisted and in 1916 went to France with the 2nd Manchesters. War gave him the subject for his poetry and introduced him to – amongst other poets – Siegfried Sassoon at Craiglockhart, where both were recovering from ‘shell–shock’. Although entitled to remain in England on light duties, Owen returned to France, earned the MC and was killed near Ors on 4 November 1918 during the crossing of the Sambre–Oise Canal.