Winged Sabres: One of the RFC’s Most Decorated Squadrons 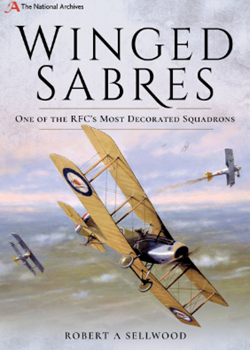 By Robert A Sellwood

Robert Sellwood’s maternal grandfather, George Tester, was killed in action in September 1917 serving as an air gunner in 20 Squadron RFC. Wanting to know more about his grandfather and the squadron in which he served led to 15 years of research into the history of 20 Squadron. The result is this superb book.

Formed on 1 September 1915, 20 Squadron went to France on 24 January 1916 equipped with the FE2b, a two–seat fighter–reconnaissance aeroplane. Although large, the FE was not unwieldy. Well–armed it was seen as an answer to the German Fokker E types and an eventual replacement for the obsolescent BE2 types suffering high casualties during the so called ’Fokker Scourge’.

At the end of June 1916 the squadron was re–equipped with the more powerful FE2d, but, following its replacement with the formidable Bristol F.2B, the squadron began to score victories at such a high rate it became the highest scoring squadron of the RFC/RAF in the entire war. Of the 628 claims submitted by the squadron’s pilots and observers, more than 460 were confirmed in the RFC/RAF communiqués. By the end of the war, the squadron had gained 72 gallantry awards, including a VC. But successes had come at a high price: a casualty rate of nearly 50 per cent.

Selwood’s intensive and expert research relates the day–to–day activities of the squadron in 25 well written chapters. In addition to the duties undertaken, and combats fought, he gives personal details of the antecedents of the squadron’s pilots and gunner/observers. Personal accounts and anecdotes bring the story of the squadron and its men vividly to life. One in particular struck me: in combat on 9 March 1916, observer Douglas Gayford was wounded in the back, both arms and right leg. Captured with his pilot, he underwent six operations, one without anesthetic. Repatriated in December 1918, semi–crippled, still riddled with splinters German doctors had been unable to remove, he appealed for help to the Air Ministry. Having been an unqualified observer when captured the Air Ministry refused him flying–pay arrears He was given a wound gratuity of £35 per annum, valid only until March 1920 because doctors classified his wounds as being only ‘serious and permanent’ not ‘very serious and permanent.’ At the time of his capture, Gaylord was six weeks short of his 18th birthday.

Regrettably, there are a few spelling errors: ‘Jagstaffeln,’ ‘Jasta,’ ‘Albatrii,’ ‘Richtofen’ ‘VizeFelwebel‘ etc – all avoidable if the publisher had employed a professional proof reader. (A dreadful chapter heading error: ‘Eclipse of the Eindeckers’) suggests that not even a cursory glance was given to the galley proofs. This is Robert Sellwood’s first book, obviously a labour of love and I feel that he has been ill–served by his publisher in this regard.

That apart, it is difficult to find words to express my admiration for the exceptional research and writing which has resulted in this magnificent book. In my opinion, easily the finest squadron history written in recent years. The highest recommendation.