With Our Backs to the Wall: Victory and defeat in 1918 by David Stevenson 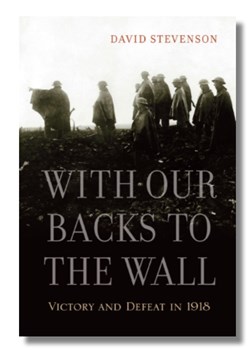 In With Our Backs to the Wall Professor David Stevenson sets out to explain why the First World War ended in 1918, how it ended and why the Allies outlasted their enemies. Employing rigorous scholarship, the reader is provided with a wide ranging analysis of how and why the war ended. The great merit of this book is that it does not solely examine this from the point of view of the British military effort. The contribution of all the Allies and Central Powers is analysed. This is not just from the point of view of the military considerations but the far wider factors which influenced 20th Century warfare. In eight chapters, as well as the military aspects, factors such as technology, intelligence, logistics, sea power, the home front and the economies of the nations involved in the conflict are examined.

This is a book for those interested in all aspects of the war efforts of all the countries involved. However, even if you are not interested in the wider social and economic aspects of 1918 it is worth reading for its analysis of the military action. The prologue summarises the situation at the end of 1917 and explains why neither side was prepared to back down. In the first two chapters Stevenson explains why the German offensives failed and why after July their opponents were able to take the upper hand and achieve victory. The chapters offer a concise explanation of the main tactical and operational factors. In the process, Stevenson nails the myth of German military genius. In March 1918 the Germans overstretched themselves and gradually exhausted themselves, from July 1918 the Allies took the upper hand. They did not achieve victory because they were gifted with military genius but because they learnt quicker than the Central Powers, made less mistakes and worked together more effectively. It was not just in military matters that the Allies worked more closely together. Coordinating their economic resources, sea power and munition production they worked together far more effectively. The result was the civilians and armed forces of the Central Powers lost confidence in gaining victory and defeat became inevitable.

This book’s value is in the comprehensive approach it takes to the events of 1918. Victory was not solely achieved at the front. All the factors which were important in winning the war are examined, from the dramatic swing in the fortunes at the front to the more mundane but highly important factors including the effective use of logistics by the Allies. At times one is almost overwhelmed by the volume of evidence Stevenson presents to support his account of 1918. However, it is an excellent account which comprehensively explains the events of 1918. Some may find it heavy going, it is light on anecdotes, but it is worth the effort.

Reviewed by Tim Halstead for The Western Front Association (November 2021)