Wounded: The Long Journey Home From The Great War by Emily Mayhew 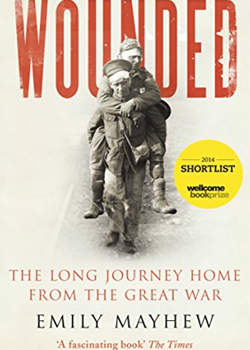 The Great War is endlessly fascinating. One of the principle reasons for this is that the conflict was one of the first examples of total war. So seismic were the changes that this totalisation inflicted, very often organisations or professions were compelled to completely rethink their response. As Emily Mayhew writes in her introduction to Wounded: The Long Journey Home From The Great War ‘…the first soldier arrived on their operating tables and they realised everything they knew about treating casualties was useless’.

Deliberately eschewing a conventional academic approach, Mayhew has chosen the narrative non-fiction genre for her book, a linear story-line, detailing the journey of casualties from the moment they are reclaimed from the battlefield to their arrival in hospitals back in Britain. It is a ‘front to back’ journey and is a largely successful means of telling her story. Each chapter focuses on a specific link in the chain – stretcher bearers, nurses, surgeons through to ambulance trains and the London Ambulance Column. In the appendix, each chapter has an explanatory note with very useful references to connected media – poetry and art for example.

The author demonstrates early on in her text how a dislocation as profound as that produced by the Great War lead to lasting innovation and change. To this end, the importance of seriously wounded soldiers receiving early medical intervention was recognised. In response, stretcher bearers were organised into a specialist corps and trained in first aid, notably how to prevent a soldier bleeding to death on the battlefield. The direct descendants of the Great War bearer teams are today’s Medical Emergency Response Teams, trained to locate and treat casualties under fire.

Although medical services underwent far reaching change in response to the Great War, Mayhew presents ample evidence of ‘muddling through’. As other historians have noted, the provision of medical treatment for the casualties of the Battle of the Somme was wholly inadequate and lead, no doubt, to many more disabling injuries and fatalities. The author also shines a light on the significance of volunteers and the vital role played by philanthropy. The London Ambulance Column, the service that transported casualties arriving in ambulance trains at London stations to hospital, was financed and organised for the entirety of the war by a single wealthy family. Even Nobel prize-winners lent their services. In the summer of 1915, Marie Curie arrived at Belgian Field Hospital No 3 with a mobile X-ray unit, a piece of equipment crucial to surgeons in locating shrapnel in a wounded soldier’s body. 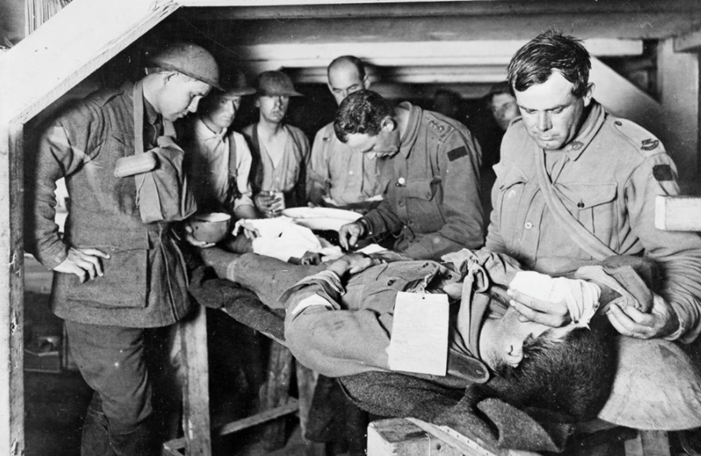 Emily Mayhew’s book chronicles the art of the possible; what can be achieved by dedicated men and women in the most difficult of circumstances. I commend this book to anyone, irrespective of an interest in the Great War.