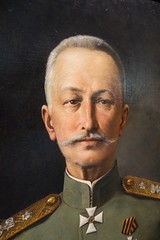 General Aleksei Brusilov (1853-1926) who gave his name to the Brusilov Offensive was, like Douglas Haig an aristocratic cavalry officer. The Brusilov Offensive of 1916 took place on the Eastern Front and was the only battle in the Great War named after a general.  The offensive which lasted from June 4th 1916 to August 10th 1916 was part of a coordinated battle strategy together with the battles of the Somme and Salonika which had the intention of drawing German resources away from Verdun.  Brusilov planned the battle over a north-south front of 200 miles, a single battlefield equivalent to half the length of the entire Western Front. It was situated in western Ukraine, stretching south into northern Romania. The battle arose from the Chantilly Conference of December 1915 in which the allies planned co-ordinated attacks against the entente powers in 1916.

When France asked for help from the allies for support to alleviate the pressure created by the battle of Verdun, the Russians were obliged to help, especially as they needed ammunition from the west. Brusilov’s main problem though was that of social rank: put bluntly, unlike Haig, he was not “aristocratic-enough” and so at Stavka (the Russian High Command) he was always out-ranked and his proposed methods for warfare were dismissed.  By September 1915 the reversals of the Russian army were enough to alarm the Czar Nicholas, who pronounced that he would take personal command

of the army from his uncle Grand Duke Nikolai. This move had two consequences, the first was that any further military reverses would reflect personally on the Czar and secondly he had no military experience and therefore would remain only a figurehead.

The recapture of the cities of Lviv and Kovel (in NW Ukraine) were to be the objective of the battle.  German intelligence was excellent and Brusilov’s main problem was how to conceal his battle strategy. To confuse the Austrian and German forces, trench digging took place along the entire line but Brusilov knew he would not receive any further support from the Russian army and so moved all his reserves to the line to dig the trenches. Ammunition was in short supply and so a short that accurate “hurricane” bombardment was planned and was surprisingly affective.

The Austrian troops sheltering against the offensive could not respond and by the end of the first day there was a 20 mile wide, 5 mile deep gap in the Austrian-Hungarian line. In their dugouts, the defenders were unable to fire on the advancing Russians and, once their positions had been overrun, they surrendered in their thousands. Behind, the gap in the line, the Austrians had very few defences and the Russian army advanced and captured over 200,000 prisoners.

This was a great shock not only to the Austro-Hungarian army but also to the German High Command and triggered a crisis in the relationship with Germany which resulted in the imposition of a German Chief of Staff, Hans von Seeckt. The only solution to support the Austrians was to find 10 reserve divisions to support the Austrians, two of which came from the Western Front. The counter attack was started east of Kovel (in N.E. Ukraine) but the Russian forces destroyed the Austrian 4th Army.

In July Brusilov renewed his attacks and captured another 30,000 prisoners. However, the Germans had used their forces wisely and using railways deployed the 10 divisions in front of Brusilov and made progress. Brusilov renewed attacks up and down the front into August but the deployment of German reserves and exhaustion of both armies brought the battle to a close.  The reckoning was terrible. Brusilov inflicted losses of 1.35 million casualties on the central powers, 1 million of which were Austro-Hungarian, 350,000 German. 400.000 prisoners were captured and 500 guns. Russian losses were about one million.

This was Russia’s greatest victory in the war and Brusilov had achieved a breakthrough of which most commanders could only dream.  The offensive also revealed the backwardness of the Russian infrastructure: there was a lack of railways from the East, a wholly horse-drawn army, a support system which could not deliver fresh men and munitions together with a command structure based on social rank.

After the battle, Austria as an independent army was effectively destroyed and thereafter was under the command of Hindenburg and Ludendorff.  Whilst Ludendorff never used the exact phrase “shackled to a corpse” in his post-war memoir, it was implied and would later became common currency. The Brusilov offensive destroyed both the credibility of the Austro-Hungarian army and the Empire. Blame for the Austrian failure was wide ranging but in an Empire in which many of the Austrian army at the offensive were Slav (and therefore not pro-Austrian) the fighting of the Austro-Hungarian army could lack enthusiasm.

Brusilov’s reputation was outstanding in an army based on elitism rather than talent. His preparation for the assault and its execution was better than anything ever seen on the Eastern Front. In the revolutionary years to come, he would not be forgotten.