“The Boys of Blackhorse Road” remembered at Ypres 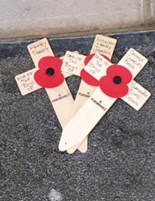 When Western Front member, Malcolm Doolin, researched his book, The Boys of Blackhorse Road. The Story of an Elementary School War Memorial, he learned that 8 of the 52 “Boys” commemorated on the memorial, now housed in its successor school,  Willowfield Humanities College, lost their lives between 11 November 1914 and 10 February 1918 in the Ypres Area. He also discovered that three brothers of ‘Blackhorse Boys’ had died in the area.

Blackhorse Road pupils would have left school by 14 and most went to work. When the War started in August 1914, over 80 ex-pupils joined the army and many others did so as the War progressed. Forty nine ex-pupils and three teachers lost their lives between 1914-1918 and are commemorated on the school War Memorial. Over time, Blackhorse Road School became Willowfield and the memorial is now housed in the entrance foyer at Willowfield Humanities College in Walthamstow.

With his partner, ex-Willowfield Headteacher, Eve Wilson, they were among the many visitors at Tyne Cot Cemetery for the Passchendaele Centenary Commemoration and attended the international event on Monday 31 July.

They laid memorial crosses to the two ‘Boys’ and one brother commemorated there. One of the ‘Boys’ is James Vickery who won the DCM at Loos in1915 for rallying the troops by playing his mouth organ on the trench parapet in the face of the German attack. 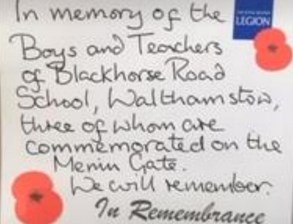 On Wednesday, 3 August, they laid a wreath at the Menin Gate where three ‘Boys’ are commemorated, as part of the nightly ceremony.

Whilst in the Ypres area they found the graves and memorials to the other three "Boys" and two brothers who lost their lives in the region. At each grave or memorial they left a personalised wooden memorial cross.

The “Boys” who were killed in this area now lie, or are commemorated, in five cemeteries and memorials,  Tyne Cot, the Menin Gate, Lijssenthoek,  Voormezeele Enclosure and the Huts Cemetery.

All of the "Boys" have their own stories, many of them poignant. This is a summary of those commemorated in The Salient.