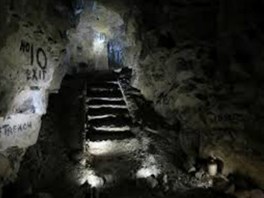 Welcome to the April Branch Newsletter, I hope that you are able to enjoy the sunnier weather that we have been having.  This month’s topical picture is of one of the exits from the Wellington Quarry in Arras, from which the attacking troops left the safety of the underground tunnels and advanced to the German lines a hundred years ago this month.  When I was there a few years ago, I found this the most evocative part of my visit. Further to last month’s talk on Mons, my thanks to Geoff Spring who has kindly sent some information on the precursor to this; the BEF’s movement to France.  Please remember the AGM this Saturday and the earlier start for food, beforehand.  We look forward to seeing you there.  I would also like to wish you all a Happy Easter.

Colin’s talk began with a background to the military and political situation leading up to the war, the Schlieffen plan and the friction between Sir John French and the French.  The latter was critical as it caused problems of coordination between the two armies.  The two Corps of the British Army  were to be commanded by Haig & Grierson but Grierson died in August 1914 he was replaced by Smith-Dorrien who also did not get on with Sir John because of his modernising of the cavalry when he took over from French as GOC Aldershot.

As the Germans advanced through Belgium and into France they were faced by the French Army with the British on their left.  Pte John Parr, 4th Middx, was the first British soldier to be killed when he and a fellow cyclist encountered the Germans on the 21st August.  The next day, the French had planned to attack the Germans but instead they retreated without telling Sir John who was still advancing.  The british dug in on the south bank of the Mons – Condé Canal with II Corps (Smith-Dorrien) on the canal and I Corps (Haig) on the right.  There were 18 bridges over the canal in this area and 40,000 British faced 270,000 Germans.  The German First Army, under von Kluck, were originally planned to attack around the back of Paris but were redirected during the advance, which angered von Kluck.  Sir John offered to hold the position for 24 hours to delay the German advance.  He held a conference at II Corps HQ on the 23rd and then went to his own HQ and took no further part in the battle.  The next day, on the right of II Corps the German IX Corps attacked in close order but suffered heavy casualties for the high rate of fire from the defenders.  Thirty minutes later they attacked again, this time in open order in an action that led to the first two VCs of the war.  Lt Deace and then Cpl Godley manned a machine gun stationed on one of the bridges until they were unconscious and out of ammunition, respectively.

Further to the British left at 09:00, the German 6th Division then attacked but were fought to a halt.  One of their officers later said that they had held the British in contempt but after this action they would never take the British for granted again.  At mid-afternoon,  the German IV Corps attacked the left of the British line but had not information about the earlier attacks so they made the same mistakes.  British casualties were 1,642, haolf of which were in the salient around Mons.

Haig, who had not been engaged in the battle, received the order to withdraw at 02:00 but II Corps did not receive the order until three hours later.  Smith-Dorrien decided to withdraw under fire and shortened the line, starting on the right with the salient.  On the 24th there was a further battle at Elouges where two battalions and two batteries of artillery fought against a Corps as von Kluck tried to force his way through.  One of the gunners said that he had fired more shells during this action than he had in the whole of the Boer War.   The British then retired and fought at Le Cateau.

The British had fought an important delaying action allowing the French army to retreat.  However, if the German attacks had been coordinated rather than sequential they may well have broken through.

The British Expeditionary Force Movement to France by Geoff Spring

In 1907-08 Richard Haldane, the Secretary of War in Asquith’s Liberal Party Government reformed the British planning for War working to a budget limit of £28 million.

The post 1908 Army consisted of 156 battalions, 72 deployed in the Empire manned by men serving 7 years with the Colours and 5 years on the Reserve. UK Based Battalions providing drafts for the overseas Battalions and the British Expeditionary Force (BEF) of six Infantry  and one Cavalry Divisions, which was designed to fight anywhere in the World. The BEF’s Divisions were based in Southern England & Ireland. Each Infantry Battalion on Mobilisation was brought up to strength by Reservists. At Mons, most Battalions were 50-60% manned by Reservists.

On Mobilisation, Reservists were recalled by Telegram or Poster and went by train to their Regimental Depot to collect their equipment and to be medically examined. Then they went as a draft to their Battalion.

Private Snodgrass of the Duke of Cornwall’s Light Infantry, (DCLI), a reservist living in Birmingham, travelled using his railway warrant to the Regimental Depot in Bodmin then by train and ferry to join the 1st DCLI based at the Curragh, Dublin, Ireland.

1st DCLI, one of the four Battalions in the 14th Brigade of the 5th Division, sailed from Dublin and landed at Le Havre on 15th August 1914. Then moved by train to the BEF’s concentration area between Maubeuge & Le Cateau.

On 20th August concentration of 4 of the BEF’s 6 Infantry Divisions, the 1st, 2nd, 3rd, & 5th Divisions was virtually complete. On the 21st August the BEF advanced towards Mons where on 23rd August they fought the Battle of Mons.

On 5th/6th August, the British Cabinet decided  to retain:

The 4th Division in England which was deployed for defence against a rumoured German invasion, then moved to France with the first elements arriving on 22nd August. The Infantry and most of its Artillery taking part in the Battle of Le Cateau on 26 August.

The 6th Division quartered in England & Ireland was deployed for defence against a rumoured German invasion. Then moved to France, first elements arriving on 10th September.

Cadet Air Mechanic 3rd Class Henry Francis Morris died on 18th  March 1917 in 3rd Southern General Hospital, Oxford. Henry was serving in the Royal Flying Corps and was at a recruits’ depot. After his death he was buried in the CWGC section of Botley Cemetery in Oxford.  Other family details not known.

As mentioned in last month’s Newsletter, all the current committee members are prepared to stand for re-election, although not necessarily in their previous roles:

There is still time for further nominations, so please contact me if would like to stand.  Thank you. David Adamson

First, I must thank your Chairman for allowing these notes to be distributed through your Branch Group Email system.

I have always enjoyed selling my books directly to readers, particularly at Western Front Association meetings but, after a good speaking programme in 2016, this must now come to an end.

At the age of 85, I find travelling tiresome and sometimes dangerous.  Last summer, for example, my car was written off in a serious accident on the way to giving a talk at the Northampton Branch.  Fortunately, my seat belt saved me from serious injury, but I now feel that I should finally retire from the sometimes arduous and stressful practice of travelling long distances to give talks unless it is a particularly attractive and interesting invitation.

But I have decided not to give up my private bookselling activities completely.  These notes explain how I am setting up, instead, a postal sales outlet.

I have the admittedly over-ambitious desire to reach a total of one million copies sold by all outlets – including the new e-books and a few foreign translations; Dutch, German, Polish, Japanese and Serbo-Croat come to mind, and I was surprised last summer to sign a contract for 3,000 copies of The First Day on the Somme to be published in Hungarian – forty-five years after it was first published in London!

I realise that, in the absence of something completely unexpected happening, I am unlikely to reach the one million copies sales figure during my lifetime.  So far, I have reached an overall total of 926,782 copies up to the end of the 2016 royalty period.  The best seller, with over 165,000 copies, is that old favourite, The First Day on the Somme.

The following pages list my books and the prices at which I am selling.  Many calculations have gone into these prices.  For example, the costs of postage and packing are heavy burdens compared to selling at WFA meetings.  But, when I finished the process, I compared my price for each title with the price that Amazon was charging for new copies sent by post.  In every case, my asking price was lower than Amazon’s.

I hope you may take the time to study my notes.  Thank you.

Many of you are probably aware of the project to place a commemorative paving slab for every WWI VC winner in their home town.  One will be unveiled in High Wycombe next year on 9th July; more details on this will be included in the Newsletter when they are available.