ONLINE: The Aisne Again – the essence of Blitzkrieg?

After relatively unsuccessful attacks on the Somme and the Lys, General Ludendorff sought a new sector in which to continue the heavy assaults of his 1918 Spring offensive. He chose the thinly held Aisne front between Soissons and Reims.

The German advance here was the furthest ever made, on one day, on the Western Front since the advent of trench warfare in late 1914. On the first day of the battle the German army advanced fifteen miles, opening up a salient twenty-five miles wide and takingalmost 25,000 prisoners.The British Army’s IX Corps was virtually wiped out.

This talk will examine the characteristics of this German offensive that led Major General H E Essameto remark ‘The technique now to be demonstrated in its highest perfection by the Germans [on the Aisne] was to set the pattern for most of the coming offensives of the war and to continue to be employed in World War Two on the Russian Front and finally, with remarkable initial success, in the Ardennes in December 1944.’

This talk also considers how the German’s tactical success proved their strategic failure. Although the initial offensive was a brilliant set piece, it lost momentum in subsequent days due to poor planning and over reaching ambition.

The Third Battle of the Aisne was the last successful German offensive of the war; thereafter the British and the French took the initiative on the Western Front. 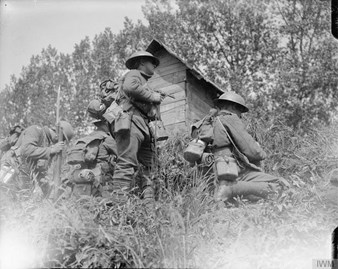 Above: Men of the Worcestershire Regiment holding the southern bank of the River Aisne at Maizy, 27 May 1918. (IWM Q 6658)

It is also possible to register by clicking this link: The Aisne Again – the essence of Blitzkrieg?

Your Computer, Your Home
ONLINE: The Aisne Again – the essence of Blitzkrieg?, office@westernfrontassociation.com