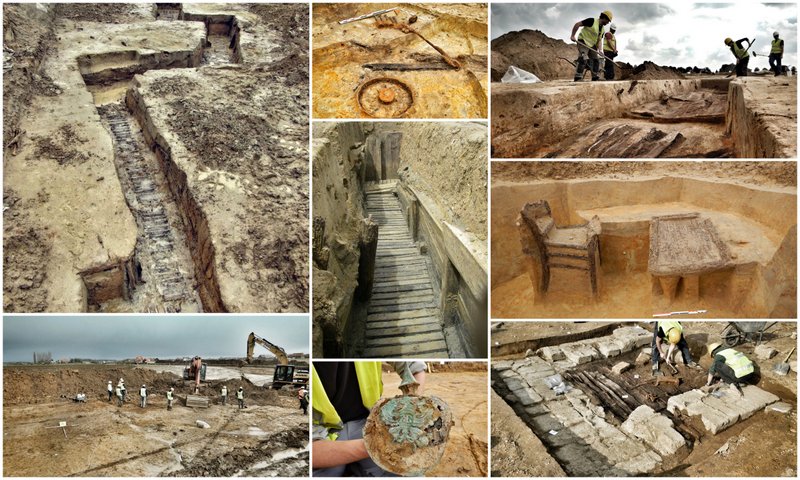 In 2015, during test trenching, a team of archaeologists discovered a well- preserved German strongpoint at a ridge top near the village of Wijtschate (also known as Wytschaete – or ‘Whitesheet’ to the British).

What the archaeologists had stumbled upon was unique; a piece of the formidable trench fortress that had remained virtually untouched since that the end of the war. Farm buildings had been incorporated into the defensive trench system to create an almost impregnable redoubt that was only taken in June 1917, in the Battle of Messines. But when the guns fell silent, the battlefront was forgotten, covered with the earth and turf that preserved it intact.

The aim of the project is to crowdfund the scientific excavation of a unique, well-preserved part of the Western Front of 1917. With the site under threat from housing development, the excavation will expose the battlefield in order to increase our understanding of the trench war, and of the men who fought there.

As they dug, the archaeologists were amazed to find well-preserved and very deep German trenches. And poignantly they encountered the remains of soldiers found as they fell, both British and German, testimony to the ferocity of the fighting here. These men still lie were they fell, untouched, today.

With a full-scale excavation almost certain, the archaeologists closed their test trenches to preserve what they’d found. But with the estimated cost of the excavation escalating, all plans were frozen. Since then the site has remained silent, untouched, covered and carefully preserved – waiting for the scientific excavation that would unlock its secrets.

This International Project brings together professionals, enthusiasts and devotees together in the mutual aim of protecting a significant Great War site, a genuinely lasting legacy of the First World War Centenary. Led by an international team, the aim is to carry out a full-scale excavation to the highest possible and exacting standards.

With the construction of housing imminent, if funded, the full-scale excavation will commence in the early Spring 2018, and be completed by the Summer. To achieve this, we need your help.

Given the importance and unique character of this site, it requires a full- scale excavation. There should be no half measures. Without it, this unique historic resource remains under threat – as it is unlikely that a commercial site investigation would uncover the depth of detail this site deserves.

As this unique battlefield remains a prime target for housing, time is running out to save it. That is why an international team of experts has joined forces in an effort to make a properly funded and expertly managed scientific excavation happen. Executed by professional archaeologists and supported by universities, governments and others – the project will be financed by sponsorship and crowdfunding.

Sponsoring private companies and public institutions will be given the opportunity to be associated with this flagship excavation; to really make a difference, and to be part of something of fundamental importance. Sponsoring companies and organisations can expect to receive prominence in all in all official documentation and websites.

This high-profile excavation will surely reach a wide media audience, ensuring that each sponsor’s contribution to this significant and unique excavation will be recognised. Depending on the level of engagement, the team will engage with sponsors on bespoke tours, personal explanations and other direct involvements in the project. In addition, all major sponsors would receive an official record of their contribution in all scientific and media outputs, marking their contribution. This exciting opportunity is likely to have a lasting legacy.

In addition to sponsorship, crowdfunding will provide an opportunity for everyone who wishes it, to take part in the excavation. In making their donations, however small, individuals will be given unique access to the team’s dedicated information sharing website. Other benefits, dependant on level of giving, might include organised visits to the site, and opportunities to meet the team and see real archaeology in action.

Simon Verdegem is an expert battlefield archaeologist with extensive experience in First World War archaeology in Flanders. He works for Ruben Willaert bvba, the archaeological company that fully supports the project. It was Simon who discovered the site during the test trenching campaign with his team. He will lead the excavations.

Peter Doyle is a military historian and military terrain expert. He is an established  author of many works of military history, with special reference to the Great War, and has been involved with archaeological work in Flanders. He is visiting professor in history at London South Bank University.

Robin Schäfer is a foremost expert of the German army in both world wars and is a military historian, author and media consultant.

Photographs from previous excavations by the team in the Ypres Salient, to show the high standards and meticulous nature of our work.