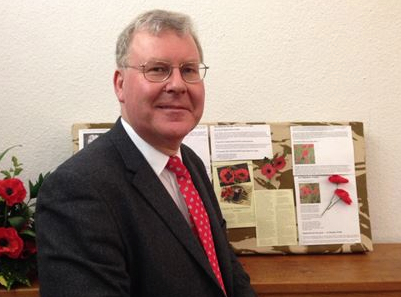 I would like to pay tribute to my predecessor as Honorary President of the Western Front Association, Professor Peter Simkins MBE. Peter has been active in the WFA over many years, latterly in the Cheltenham and Gloucester branch. When Corelli Barnett stepped down, Peter was an obvious choice to succeed him as President of the WFA, as he is one of the most influential historians of Britain and the First World War. Peter has published widely on military history, especially the Great War. His magisterial book Kitchener’s Army won the Templer Medal in 1988, and after more than 30 years it remains the most important book on the subject. In a long career at the Imperial War Museum, ultimately as the Senior Historian and Head of the Research and Information Office, Peter played a significant role in portraying the two world wars to a lay audience. After retiring from the IWM, Peter has had a second career as an Honorary Professor, first at the University of Birmingham and latterly at the University of Wolverhampton. In this role, Peter has been immensely influential - and very popular - with successive groups of MA students studying the First World War.

We have been lucky to have had such a front-rank historian as WFA President over the period of the First World War centenary. Peter has been a distinguished representative of the Association in many events, and his credibility as a leading scholar of the Great War has undoubtedly enhanced the WFA’s profile. As well as his public role, he has worked hard  behind the scenes for the WFA. I know Peter’s wise counsel has been appreciated by successive Chairmen. As his leading role at many WFA conferences and events testifies, he has been a very ‘hands-on’ President.

Peter is the opposite of an ivory tower academic, being thoroughly grounded in real life. He has interests outside military history, not least his other life as a jazz pianist, and his support for Ipswich Town FC. Throughout his time as President, as throughout his career, he has been loyally supported by his wife, Jane, who thoroughly deserved the bouquet she was presented at the last President’s conference.

I’ll end on a personal note. In 1981, as a 20 year old undergraduate, I visited Peter at the IWM to ask his advice on my third year dissertation. He took me seriously, gave me an hour of his time and some excellent advice, and thus played a significant role in setting me on the path of my career as an academic historian. For nearly forty years, Peter Simkins has been my friend and mentor. Thank you, Pete, for your service to the WFA, especially as Honorary President. Congratulations on your appointment as  co-Patron with Professor Sir Hew Strachan. I know that you’ll relish your new role as elder statesman of the WFA.

Who's Who at The Western Front Association