For a number of months during 2020 a large number of members of The Western Front Association have been undertaking a ground-breaking piece of research that hoped to 'uncover' the names of men who served in the British Army (and Royal Navy and RAF/RFC) using a pseudonym. This was known as 'Project ALIAS'.

The complexities - and sheer scale - of the project were immense but we are now delighted to announce that the work has been completed.

The result of this is a brand new (and easily searchable) database of men who were killed during (or immediately after) the war who used a name different to their real name for the purposes of their military service.

Previously, the names of these men had been confined to the database held by the Commonwealth War Graves Commission, but Project ALIAS has increased the number of these men who have been identified as using pseudonyms from approximately 3,500 to approaching 10,000.

We believe this will be a major help to family researchers and military historians. 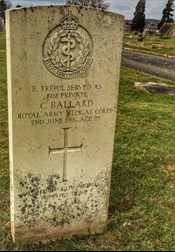