Out Now ! Stand To ! No. 124 An introduction and Contents 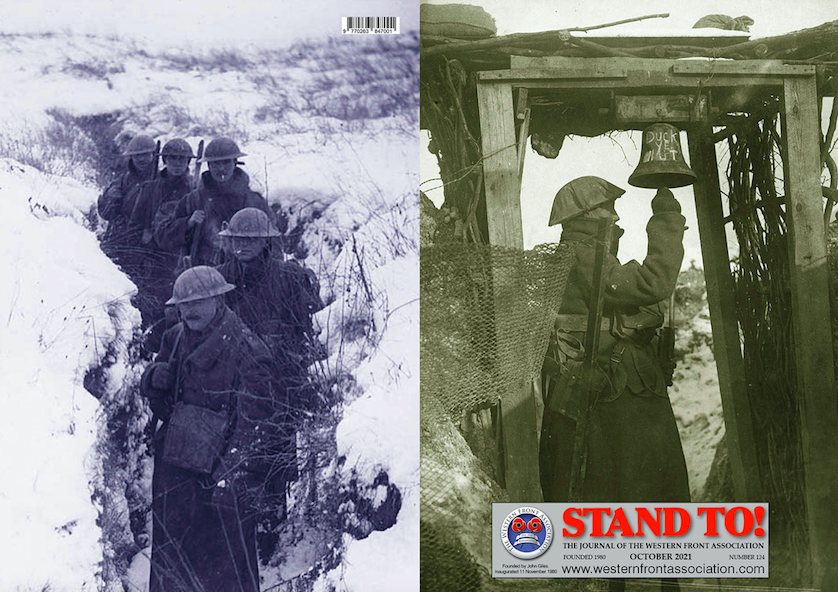 This is the fourth edition of Stand To! this year - one more than usual, and something we will do every year from now on, with four editions of Stand To! each year and three editions of Bulletin.

Stand To! Editor Matt Leonard writes that ‘the extra edition allows for more of your research to be published and gives further room for topics that go beyond the front lines.’ Introducing these edition Matt writes about the final instalment of Nurse Takeda–san’s experiences, ‘that this memoir came to us in England at all, let alone from Japan via Belgium, with a little translation help from the US thrown in for good measure, is testament to the global reach of The Western Front Association.’

Ian Ference, writing from New York, provides his final installment on the role of amateur stereographers in recording the war.

Andrea McKenzie from Toronto, Canada describes the efforts Canadian nurses, known as ‘Bluebirds’ and reminds us how devastating the last epidemic was to sweep through Europe.  The Camera Returns compares photographs from the French village of Chipilly with its moving memorial to 58th Division.

Michael Lucas examines Major General Bertram Mitford’s time with 42nd Division and Richard Earl describes the ‘Error of Judgement’ that occurred on 1 September 1916 when 108 Brigade’s gas attack went awry. Finally, Stephen Manning looks at the role of NCOs in the British Army during the war, asking if they really were the glue that held everything together.

While in Garrison Library Andrea Hetherington provides advice on what to read next, reviewing books on a wide range of topics from fighter planes to prison camp life and in the third in our series revisiting classic works, Jack Sheldon reminisces the German army on the Somme and recommends some reading.

The Memoirs of a Japanese Nurse on the Western Front (Pt III): Hajimeko Takeda’s Notes by a Japanese Nurse Sent to France Translated by Paul Carty and Eiko Araki, edited by Freddy Rottey and Dominiek Dendooven pp 12-16

‘The Carries Are Getting Terribly Long’ A New Zealand Stretcher–Bearer on the Somme, September 1916 by Graham Howie pp 17-21

NCOs: Backbone of the British Army? by Stephen Manning pp 35-39