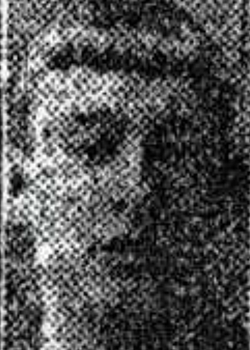 George has the unenviable status of being the last British soldier to be killed in action.

Born in York in the early autumn of 1878, at the 1881 England Census, the 2 year old George was living with his father James (Confectioner) and mother Mary at 4 Union Court, York.

A decade later at the 1901 Census, George and the family are living in West Hartelpool. Father is given as a Sweet/Jam Boiler and George a barman (now age 22) in a public house. Parents, George and sister Jane, 2 years George’s junior, live at 19 Harrow Street.

Another decade on and George is now living in Leeds and working as a coal miner. He was living with his Mother, his father given as ‘absent’ , at 14 Kippax Terrace, Long Close, Lane, Leeds.

On enlisting George joined the 5th (Royal Irish) Lancers. He died on 11 November 1918, reportedly at 10h56 minutes before the Armistice was declared. He was 40 years of age.

In the Army Registers of Soldiers’ Effects he is given as married to Hannah with a son James C.

He is buried at St Symphorien Cemetery, Mons, France.

Being able to view his Pension Card in the Ancestry Records available to search for free by Western Front Association members, confirms his marriage to Hannah Maria (born 4 June 1889) and the existence of their son James Cornelius (born 16 November 1913). It says they were living at 49 Edmund St Bank, Leeds.

In 1920 this Pension Award were learn that the Army Pension due to Hannah Maria was deemed ineligible as 'Her late husbands' earnings prior to the war were insufficient to qualify her an Army Pension under article 13 of Royal Warrant'. With thanks to Jonathan Boff and Taff Gillingham for collectively deciphering the handwriting.