The Commonwealth War Graves Commission has changed the commemoration for Captain Fergus Bowes-Lyon, an uncle of Her Majesty the Queen. Fergus died in France during the Battle of Loos in September 1915 and, until now, had been commemorated by the Commonwealth War Graves Commission on the Loos Memorial as he had no known grave. His grandson wrote to…

'From Private to Major via the Foresters Arms': The life, death and rediscovery of Octavius Darby-Griffith, MC

British visitors to the south of France will often take the A26 'Autoroute des Anglais' out of Calais. Some 140 miles down this autoroute, they will see on a prominent hill to the right the towers of the medieval cathedral at Laon. Some may turn off the autoroute to pay a visit, others will press on towards Rheims and further south. If the opportu…

Tours every Sunday (except Easter Sunday) until the end of May. This spring, visitors to the Commonwealth War Graves Commission’s largest cemetery in the UK are invited to join a new series of tours to discover its history and the incredible stories of those buried there.  Spring Tours There will be experienced volunteer guides working on beha…

He was a farmer. He enlisted at Keswick, South Australia on 7 May 1915 and embarked on overseas service from Adelaide aboard HMAT Kanowna on 23 June 1915. After serving at Gallipoli with the 27th Bn AIF from September 1915, Alexander moved to Egypt. After a period of illness, he transferred to the 32nd Battalion and moved to France, arrivi…

Due to the Coronavirus  the April meeting has been cancelled. Please check the website for any further  information about the May - No decision has been made regarding this meeting yet.        The CWGC  by Rebecca Smith     Rebecca Smith is the South West Public Engagements Coordinator for the CWGC.   Come and hear how the work of Sir F…

Parents Plato (late judge of the Native Court of Appeal in Cairo) and Julia (née Agelasto) of The Lodge, 19 Southfields Rd, Eastbourne, Sussex.  Augustus was educated first at St.Vincent’s Prep School, Eastbourne, then at Eton and finally at Christ Church, Oxford. Augustus was a keen sportsman; he was captain of swimming and rowing. He rowe…

Frances Lincoln Ltd Publishers, 2008, £30, 224pp, illus, index. ISBN 978-0-7112-2678-8  This coffee-table size book, published on the 90th anniversary of the Armistice, is a real credit to its joint authors: WFA member Gerald Gliddon, who needs no introduction to readers of Stand To!; and Tim Skelton, a chartered surveyor and a member of the Lutye…

Simon Bendry, the former Programme Director of the First World War Centenary Battlefield Tours Programme based at University College London, talks about the programme that completed its work in March 2020. Your browser does not support the audio element. …

It is often asserted that the first British soldier to be killed in the war is buried very close to the last soldier to be killed, at St Symphorien Military Cemetery, Belgium. Indeed, the Commonwealth War Graves Commission note that Private John Parr - who was killed on 21 August 1914 - is 'Believed to be the first British battle casualty of the wa…

Memories of the child of an Imperial War Graves Gardener

In November 1999, a WFA member called Frank Burns of Scruton, Yorkshire, was invited to address a local branch of Probus on the subject of ‘Visiting the Battlefields of the First World War’. Enjoying a coffee before the meeting began, he was approached by a man carrying a plastic bag containing old photographs and newspaper cuttings. The man was ca…

ONLINE : The work of the Commonwealth War Graves Commission and its educational charity

‘Who we are’: The work of the Commonwealth War Graves Commission and its educational charity' presented by Michael Chapman, a speaker for the CWGF. Mike will also provide details of some of the CWGC casualties buried locally. The talk starts at 19.30. MK Branch members will receive an automatic invite, but all are welcome. Anyone who wishes to…

Set up in a hurry in the opening months of the First World War Seaford Camp in Sussex on England's south coast wasn’t ready for its first 10,000 trainees in September 1914 so the men, new recruits into Kitchener's Army from southern Wales and east Lancashire found themselves billeted on the town of Lewes, Sussex They were divided three ways betwe…

From ceremonial duties to First Ypres and beyond: The 1st Life Guards and their single worst day of the war

This is a brief account of one cavalry regiment's war which reached its nadir in very unlikely circumstances whilst they were in a supposedly very safe location on the French coast re-training for a new role. The story starts and ends at Etaples Military Cemetery. The cemetery is – as those who have visited it – a vast and (for its size) relativel…

Extra edition: Simon Bendry of the Commonwealth War Graves Commission talks about the Commission’s War Graves Week that takes place between 21-28 May 2021.

We've made a great start! Nine schools have registered so far ... come and join us! 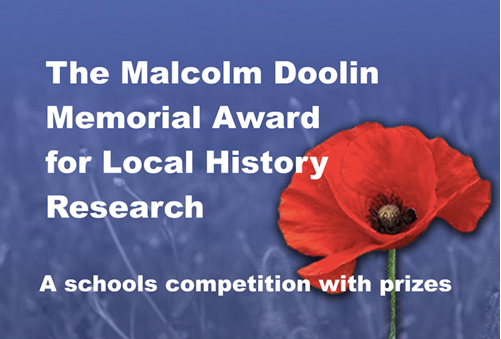 Have you registered your school for the Malcolm Doolin Memorial Project for Local History Research yet? http://bit.ly/WFAMemorialAward2021
The Commonwealth War Graves Commission can support you with finding graves, touring cemeteries and providing speakers.
Nine schools registered so far and 8 of them partnered.

The 'fake' French Aristocrat at Etaples

CWGC from inception - by Steve Brunt

Steve’s presentation  will look at who the CWGC are and the
origins of the organization, it’s national and international commitment and its work going forward.

Speaker this month  is Steve Brunt,

A little about our speaker this month:

Megan Kelleher talks about her research into public awareness of Commonwealth War Graves Commission sites in England. She is a doctoral candidate at the University of Kent.

The infant Oswald moved from Aberdeen with his father Rev. Clarence Chambers, a Kent born baptist minister (without charge) his mother Hannah (née Bullock) three brothers and three sisters to Newcastle Road, Stoke on Trent in 1876 where the family still lived at the 1881 Census at 15 Newcastle Road, Stoke on Trent with the addition of one 15 year…

For many families of ‘the missing’, the absence of a known grave in the immediate aftermath of the war was unbearable. It would, of course, be some years before the Memorials to the Missing were constructed after the war. Field Marshal Lord Plumer, when unveiling the Menin Gate in 1927, acknowledged the void that many families of ‘the missing’ woul…

There is currently considerable interest in battlefield archaeology. Between the wars a similar process  occurred to exhume the bodies of missing  soldiers, identify them,  and inter them in IWGC cemeteries. How was this done?  Who did it? What were their experiences? Dr Hodgkinson will discuss these questions. Peter Hodgkinson has an MA in Milita…