Prisoners & Escape: Those Who Were There

I escape from Groningen!

After the fall of Antwerp in 1914, an R.N.D. Able Seaman is interned in Holland but escapes to England. The following is an extract from the account of Able Seaman John Henry Bentham, Benbow Battalion, Royal Naval Division which, for reasons of brevity, omits many photographs and details of camp life, incidents during the escape, and his eventual …

The Second World War is probably more associated with escape exploits of prisoners of war, but there were a number of daring escapes (some more successful than others) during the Great War. The escape of 29 officers from Holzminden PoW Camp is probably the first ‘great escape’. Holzminden was a prison camp situated sixty miles south west of Hanove…

The presentation will be live and online.  In the winter trenches and skies of World War I, soldiers and pilots alike might avoid death, only to find themselves imprisoned in Germany’s archipelago of POW camps, often in abominable conditions. The most infamous was Holzminden, a land-locked Alcatraz of sorts that housed the most troublesome, escape…

In this talk, Richard Lloyd will discuss the stories of officers and men who escaped from German captivity during 1914-1918. 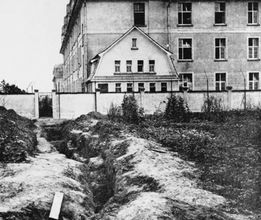