The One Hundred Days 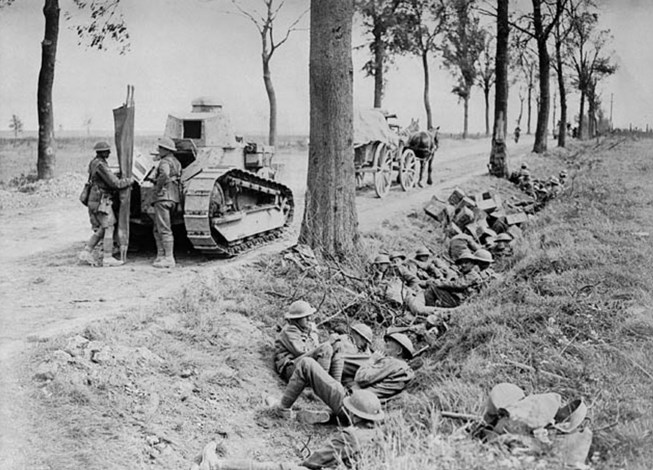 The Centralisation of Command

Sir Douglas Haig always believed in the judgement of the man on the spot, but after the losses to the BEF during the actions of 1914 and 1915, the BEF was ‘deskilled' in this judgement process during the build up to the Battle of the Somme of 1916. The lack of experienced commanders encouraged the centralisation of command and control of the battlefield. Even the importance of artillery took this into account as divisional artillery was concentrated and co-ordinated at Corps level, a crucial part of the planning of any operation.

By 1917 the BEF was adopting a more managerial style with divisional and brigade commanders playing a bigger role in the planning of offensives. 1918 saw the big change: semi-open warfare was only fluid if command and control was devolved downwards to divisional and brigade commanders. Two of the most influential commanders in the 100 Days offensives of the Fourth Army were Major-General E D Budworth (GOC RA Fourth Army) and Major-General AA Montgomery (MGGS Fourth Army).

Beyond the Hindenburg Line, September 1918

After the crossing of the Hindenburg Line in September 1918, the German resistance stiffened and, for a while, it looked as if Foch's autumn offensive would grind to a halt in this sector. The German Army took up a new position along the River Selle, close to Le Cateau (the site of the August 1914 battle of II Corps during the Retreat to the Marne). When Rawlinson's Fourth Army reached the River Selle in October 1918, they were faced with three problems: crossing the river itself; the railway embankment on the far side; and the ridge above the embankment. The decision was made to commence the assault at night and, as the river was not so very wide at this point, planks would be used for the soldiers to cross in single file. Later, pontoons would be required for the artillery to cross the river.

The Fourth Army prepares for battle

Fourth Army took two weeks to prepare for the battle which was to be an attack along a ten mile front. Rawlinson left the planning to his two Corps commanders: TLN Morland (XIII Corps) and Walter Braithwaite (IX Corps). Morland was still in place since 1916, whilst Braithwaite was newly promoted from command of 62nd Division. In XIII Corps the divisional commanders were HC Jackson (50th Division) and HK Bethell (66th Division). Bethell was, at 35, the youngest British divisional commander. Bethel was not the only ‘new type' of commander, as the Brigade commanders in Morland's Corps were all in their own way extraordinary. These were:

P M Robinson (GOC 149 Brigade); George Rollo (GOC 150 Brigade) who was a marine engineer who had joined the army as a civilian and served as a captain in the Liverpool Pals before promotion (civilian to Brigadier-General in four years!); Richard Sugden (GOC 151 Brigade), a corn miller's son who had played Rugby League for Brighouse Rangers and Yorkshire (who would have thought that there would be a General in the Great War who had played Rugby League!) and who was in the Imperial Yeomanry and commissioned from the ranks during the Boer War. He went to war with the 49th (West Riding) Division in 1915.

The attack took place during the night of the 17 October and continued until 20 October. After crossing the river in fog, the battle developed into a dogfight. In the morning the three brigades were thoroughly mixed up. Unlike earlier battles when time would have been lost while men were sorted back into their original brigades, these three brigade commanders carried on directing the battle, each instructing the battalions closest to their command posts. This was a far better organisation method than existed in the German lines where time was lost re-organising the men.

Further south the divisions in Braithwaite's IX corps were experiencing the same battle conditions. Here Braithwaite had left the organising to his divisional commanders: E P Strickland (1st Division), T O Marden (6th Division) and G F Boyd (46th Division). Of these commanders Gerald Boyd stands out as being different: he joined the Devonshire Regiment in 1895 as a private soldier, was commissioned into the East Yorkshire Regiment in 1900, began the Great War as Brigade Major in Hunter-Weston's 11 Brigade and was finally promoted GOC 46th Division in September 1918. In the night attack Boyd was instructed to carry out ‘Chinese' deception manoeuvres: lots of movement and shelling but not actually taking part in the battle. Opposing IX Corps were four German divisions - 3rd Naval Division (which lost 50% of its men); 5th Reserve (Brandenberg) Division (which lost 75 as casualties); 15th Reserve (Rhineland) Division which was effectively destroyed as a fighting unit; and 24th (Royal Saxon) Division (which lost 3,000 men in total).

Considering the battle as a whole, the plan was excellent and the deception worked. Rawlinson left his Corps commanders to concentrate the bulk of the action in a narrow section and pinched out the strong point at the Andigny Forest. Only 6th Division had mixed results, all the other division achieved their objectives. The effects of the artillery during this battle have often been exaggerated: the counter-battery fire was as effective as earlier battles. The battle was won by the infantry advancing in fog and surprising the Germans who were in excellent positions along the embankment and below the ridge. It is also assumed, mistakenly, that there had been a collapse in German morale at this stage in the war. This just was not true as the casualty rates in both armies were still high. In the BEF they are comparable to the casualty rate during the Battle of Arras, 1917.

These new tactics used by the BEF - combined, ‘all arms’ battles with limited objectives - kept the Germany army occupied. The number of German divisions facing the Third and Fourth Armies was greater than at any other place in the front line on the Western Front (by October 1918 there were 99 German divisions facing 60 BEF divisions). The German high command had moved more men up from the Meuse-Argonne having identified the BEF as their most dangerous opponents. This is one of reasons for the rapid success of the Franco-American offensive in the Meuse-Argonne area, the density of German divisions on their front was lower and they had fewer reserves.

As the BEF pushed the Germans back during Foch's autumn offensive which we now call ‘The 100 Days’, the average soldier could expect to ‘go over the top' with a greater frequency than in earlier battles such as the Somme in 1916. On average, a soldier could expect to be sent into the attack at least five times during the 100 Days. This is very different to the average Somme survivor who would have experienced three attacks in three and a half months.

Reference: This article is based on a talk given by Professor Peter Simkins to the Yorkshire branch of The Western Front Association