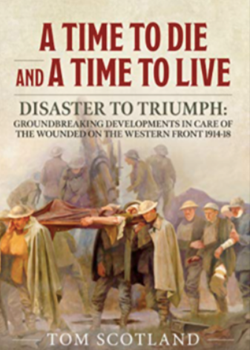 A Disaster to Triumph: groundbreaking developments in care of the wounded on the western front 1914-18 by Tom Scotland

It appears there are few works on the topic of wartime medicine and its development – certainly I have not read one before which charts and explains the massive wartime developments in medical knowledge, casualty treatment and the growth of successful medical outcomes. My first thought was to forward it to Doctor Niall Ferguson who regularly reviews for Stand To! Not least I thought he would understand the fine points of medical practice and procedure during the Great War.

However, the first few pages of A Time to Die and a Time to Live revealed the work of a skilled author with a fascinating ability to impart knowledge of medical expertise to those with little knowledge of a subject which is, for the layman, fascinating and surprising by turns. (It should be added that this is another from the Helion stable which shows a welcome return to far sounder editing and proofreading than Stand To! reviewers have noted in recent works.)

Few readers – other than those with overriding and narrow interest in single aspects of the Great War – can fail to learn much from its text or range of clearly charted – and often surprising – statistical evidence and analyses.

Tom Scotland qualified as a doctor in 1971. He specialised in orthopaedics and developed an interest in the Great War. He has written several books on aspects of British wartime medicine as well as works on the Somme and Ypres.

In this book, his first chapter is a gripping and unusual fictional stand–alone section based on solid facts. It compares the tardiness, the poverty and the failure to treat the seriously wounded in 1914 with the speedy, more expert, life saving treatments available by 1918 to reveal improvements in medical knowledge and its application during the war and of the medical staff who developed and employed them.

The first fictional patient, in 1914 – his journey down the line delayed, his infected wound uncleaned by doctors and sutured allowing infection to set in – died. The second, in 1918, somewhat similarly wounded, but more effectively and more rapidly treated, survived. Alone, the chapter highlights the relative ignorance and adherence to outdated medical treatment at the beginning of the war and the effect of highly effective and speedier medical treatment developed during almost six years fighting.

Invaluably the state of medical expertise and knowledge on the outbreak of the Great war is prefaced by an overview of British and other relevant military medicine since the Napoleonic Wars as well as medical advances during the period. Following chapters show the improvement of medical practice and organisation – operative disasters and surgical ‘break–throughs’ and developments including blood transfusions, anaesthetics and lifesaving surgical advances.

The book concludes with an overview of the successful Australian response to mobile warfare and its deployment of Field Ambulance Resuscitation Teams right behind the fighting. The author finally evaluates the medical legacy of the Great War and the missed opportunities to benefit fully from it after 1918. Throughout, valuable tables and maps help chart the reader’s course through the topic. Above all, Tom Scotland is a skilled author, yet one determinedly unacademic in approach. Not least, he is bold enough.

Whilst it has long been accepted that wars trigger great upheaval and change leading to advances in the sciences, in engineering and technology and in medical developments the successes and failures are valuably defined and clearly explained. This is an outstanding book, from which I learned much and which held my attention from page one. Highly recommended.