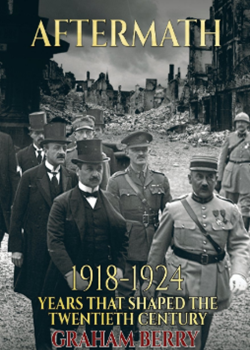 Hindsight is a wonderful thing, yet, it is nonetheless tantalising to pose the question: had the leaders of the Great Powers known what they were about to destroy, would they still have embarked on war in 1914? As is clear from the title, this is not a book about the Great War, but about its dramatic and far–reaching consequences. Much has been written about each of the themes included by Graham Berry, but his approach is to offer a comprehensive explanation of the impact of the war especially, but not entirely, on Europe. Each chapter explains the effects of the war between 1918 and 1924 and offers pointers to later developments that have followed throughout the last century and into this.

The book’s scope ranges from the end of the war, to Spanish ‘flu, Versailles and the Middle East, and includes such issues as the triumph of communism in Russia, the USA and women in Britain. It concludes with examining the collapse of the Liberal Party, Ireland’s economy and class and culture in modern Britain. Insights into differing interpretations of events are provided and each chapter has a recent, authoritative publication recommended to take readers further. Aftermath. 1918–24, offers a clear narrative and analysis– especially those studying this era for the first time – and an illuminating and sober overview of the enormity of the world–wide changes triggered by war. Chris Robinson