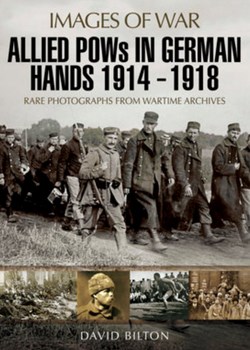 Allied POWs in German Hands, 1914-1918 is an engaging collection of short chapters and contemporary photographs of life as a prisoner of the Germans in the Great War from capture to the end of captivity. David Bilton, a Western Front Association member and a prolific writer of World War I histories, has collected a variety of primary source memoirs, letters and archival documents to weave the narrative tale together of the prisoner of war experience in German hands. The strongest contribution from this book is the fascinating collection of photographs Bilton has assembled to tell the tale of Allied POWs. From the moment of capture to their return home, Bilton has found compelling visual evidence of the POW experience and brought it forward in this book.

Organized in six chapters, Allied POWs begins with a discussion of the circumstances of capture. Private Ernie Stevens, of the Middlesex Regiment, described his feelings of capture as “one of the worst you could ever have in your life. It was the most horrible thing I’d ever imagined could happen to me….I felt utterly bewildered” (Bilton 16). His feelings were not unique, as Bilton explains using diary entries, letters, and memoirs from his sources. The decision to surrender, however, was not always an individual choice or circumstance. Bilton briefly covers the fate of the 2nd Royal Inniskilling Fusiliers, who were surrendered by their Commanding Officer on 21 March 1918 in the face of overwhelming German strength during the spring 1918 offensive. Regardless of the reasons for captivity, the shock of initial capture remained vivid to men like Stevens even years later.

After capture, prisoners were, by and large, moved along to the rear area where they were aggregated, processed, and transported further into German-occupied or German territory. Bilton presents evidence this was far from a smooth process for either the prisoners or their captors. He explains some of the reason came from the sheer number of prisoners captured by the Germans from 1914 onwards. By August 1915, over 1.4 million prisoners of war (including civilian internees) were in German hands. The German Ludendorff Offensive in 1918 added nearly 90,000 British troops alone to their prisoner rolls. On 10 October 1918, a month before the end of hostilities, Germany held over 2.4 million prisoners from around the globe, including Brazil, and Japan. These men and women were separated into approximately 200 camps throughout the German Empire where conditions ranged from relatively humane to abhorrent. The most extensive and significant chapter in the book is Bilton’s treatment of camp life and death, which covers everything from medical treatment to food to resistance efforts to punishment to camp entertainment. Bilton astutely compares and contrasts the differences between life in officer and other rank camps, while avoiding relative judgment on who had it ‘easier.’

His chapter on escape efforts is also a strong point. Given modern day efforts at indoctrinating soldiers to make every effort to escape once captured, what Americans now call the ‘Code of Conduct,’ it was surprising to see just how few attempted escape and the definitive influence rank had on the process. While this might be an absence of evidence instead of an evidence of absence, Bilton explains the differences in camp life and work, food rationing, and familiarity with the German language as decisive factors in the likelihood of escape. Similarly, his chapter on civilian internees, particularly those at Ruhleben near Berlin, covers subject that has been little explored in other World War I histories.

The book could benefit from several changes and expansions. First, the focus of the book is almost entirely on British and Commonwealth experiences. While there are some photographs and passing mentions of French or Russian prisoners, the vast majority of the work is focused elsewhere. This is disappointing and a historical oversight given the significantly higher numbers of Russian and French POWs held by the Germans. The overweighting of British experiences might be due to Bilton’s access to sources, which is certainly understandable in Russia. Along this same line, there is no mention of Italian prisoners in the book aside from inclusion in several tables. The Italians had, in October 1918, almost as many men in captivity as the British Empire did and their omission was disappointing. As a result, the book would be better titled Commonwealth POWs.

The inclusion of a map in the appendix showing prison camps would aid readers in understanding the constellation of camps mentioned in the text and photographs. A map of the camps would also assist readers in understanding the distances required for transport from the front and for escape. This said, maps are not a necessarily easy reference to produce. The sheer number of military districts and camps could very easily have overwhelmed a cartographer and made this a ‘nice to have but impractical’ feature. Its omission in no way hinders the writing or photographs but could provide an additional layer of understanding to the reader.

David Bilton has put together a readable, popular history, complete with hundreds of period photographs that better explain a little-covered aspect of the Great War experience. His chapters are enlivened by the voices of his subjects and sources, making it a quick read. The book is aimed at the popular market rather than an academic one but even academics will find value in the sources and references made. 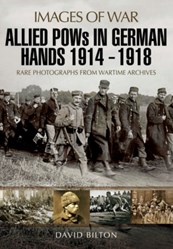